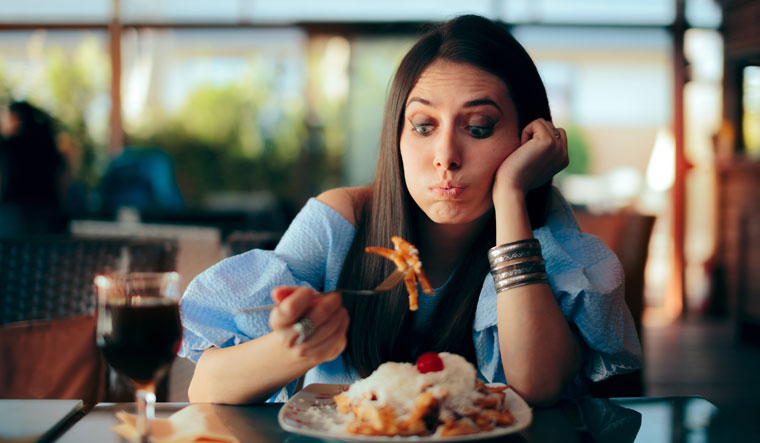 Be it ice cream after a tooth extraction or a sweet celebratory treat—food is something that we turn to in our highs and lows. However, the build-up of fat as a result of consuming a lot of food is often scoffed at. Thanks to social media and the templates of beauty that the influential crowd has put out, fat is considered ugly and, often, synonymous to being unhealthy. Overweight people are blamed for their lack of willpower or discipline and this leads to further damage, not only to their self-esteem but also their mental health. In the Netflix series Insatiable, Debby Ryan who plays Patty Bladell says, “You want to eat something you know you shouldn’t but all you can think about is that thing. Then you stop thinking and eat that thing and some more until you hate yourself for eating a lot.” This condition is called binge eating or compulsive overeating disorder.

Eating disorders are beyond food. It comes under the category of complex mental health conditions that often require the intervention of medical and psychological experts to alter their course. “As a child, I was blamed for eating too much and lack of self-control,” says Athira Prakash (name changed), an IT consultant in Kochi. “Some called me big-boned while others told my parents to feed me less. I was put on my first extreme diet when I was eight; I still remember the shame and pain I went through during the process. My friends made fun of me, I had aunts who would openly comment on the fluidity of my back and uncles who displayed paedophilic traits like spanking or pressing the flab around my waist.” Athira was put on a strict, raw diet with just fruits and vegetables to bring down her weight by 12kg. She was also made to stay away from family gatherings and birthday parties. “Despite my cry for help, my parents were bent on making me lose weight. It almost felt like they fertilised the body-shaming scene. As a result of this, I became aloof in my adolescent years and suicidal in my late teens; I also started to hide and eat,” says Athira. After over a decade of torture, she understood that the problem is beyond food or discipline. “I heard about it for the first time during an event in my college as part of Mental Health Week,” she says. Without wasting any time or consulting her family, she made the decision to understand her condition better. “I was late but I sought help. With a combination of therapy and diet advice, I was able to beat it and get fit in three years,” says the 28-year-old who also works part-time as a Zumba instructor. “Initially I was taught how to distinguish between want and need. Next, my triggers were identified and medication was given for my anxiety and episodes of depression. I also worked with a dietician to fix my eating patterns. I had one-on-one sessions twice a week with my therapist and once a month with my dietician.” Athira also stresses how it is an ongoing journey and the kind one needs to take alone.

According to Bengaluru-based dietician and certified clinical counsellor Priya Ashok, patients come with a lot of guilt and shame about their behaviour. “It is mostly because of how people around them act. They tend to blame it on the patient and never even think of the possibility of the condition being related to their mental health,” she says. “Binge episodes are associated with eating more rapidly than usual, eating until feeling uncomfortably full, eating large amounts, eating alone because of feeling embarrassed by how much one is eating and feeling disgusted with oneself, depressed or guilty afterwards.” Not to be confused with emotional eating which happens only during mood swings, a compulsive overeater binges about three to four times a week.

“Compulsive overeating usually starts slowly,” says Dr Zoheb Raj, assistant professor of psychiatry, KMCT medical college in Kozhikode. “A child may turn to food when upset. Over time, the child learns that food comforts upset feelings.” The disorder may also occur when people make repeated negative comments about a person's weight. It may occur after a traumatic event in childhood, or after restrictive dieting. “Home environment has a big role in this. Be it controlling parents, absence of a strong parental figure or negative role models for eating,” he says.

For Abhishek Singh (name changed), things were different. He did not realise that he had a binge eating disorder because he was never overweight. “Growing up in a joint-family Punjabi household, making food and eating it was a big thing for us. We had no lack of food at home and I used to snack all the time. But I was never called fat. It was only when I moved to a new city and started living alone that I realised that how much ever I eat, it never seemed enough,” he says. Soon he had several lifestyle diseases like high blood sugar level, blood pressure problems and high cholesterol. “I used to eat less when I go out with my friends but double, sometimes triple the amount when I am alone. Loneliness was a huge trigger for me and I used to binge on sugary food,” he says. Abhishek identified his problem in his early thirties and failed thrice before he could beat it. “It took me about five years. I kept failing because I did not take my therapy sessions seriously. I started watching a lot of self-fitness techniques online and tried several fad diets; it was both mentally and physically taxing,” says the 36-year-old software engineer.

Ashok says the diet culture content that is freely available online can turn out to do more harm than good. “One thing I tell my patients is to get rid of any form of diet culture content. Once they do that, it is easier for us to work with them,” she says. “We also work closely with the associated psychiatrist so as to get a better picture. It is important to understand the kind of medicines prescribed before charting out a diet plan which varies from one to another.”

According to Meredith MacKenzie, clinical counsellor, eating disorder therapist and social media influencer in Canada, binge eating is both a biological and emotional response to a stimulus. In her recent post on her YouTube channel, she says how identifying triggers is key in beating eating disorders. She also emphasises on chanelling emotions, before and after eating, and how planning meals and snacks is a huge gamechanger. Experts also recommend engaging in hobbies, sports or art that keeps the mind engaged. “Anything except a lot of screen time,” says Ashok.

Compulsions are usually a result of obsessions. Hence, obsessive thoughts of low self-worth, being overweight, or dieting can trigger the compulsion to eat. The more weight a person gains, the harder the person tries to restrict the intake of food. Dieting is often what leads to the next binge.

Did someone say cheat days?

★ Seek help if you feel like you have an unusual eating pattern. Every kind of concern in this area is legitimate

★ Identify triggers and work on strategies to combat them

★ Avoid consuming food while binge watching a series or movie