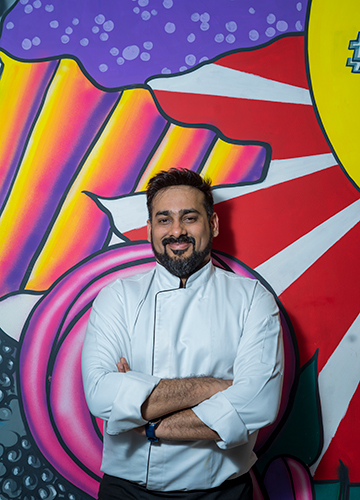 A Chinese cookery show ‘Yan Can Cook’, back in the early 90s, is what got chef Amit Puri whipping up different dishes in his home kitchen. “I think this was the only cookery show in Doordarshan and I used to watch it religiously with my family. Apart from that, I used to help my parents cook from a very young age. From dicing vegetables to trying out new dishes over the weekends, one thing translated to the other and before I knew it I was in a hotel management college in Chennai,” Amit says. After finishing his course, he trained for eight months in a Chinese restaurant before taking up his first star hotel job in Bombay. “I was always fascinated by the Pan Asian cooking styles and working at a Chinese restaurant really helped me explore a lot of areas which were new to me,” he says. While most of his batchmates chose to work in the ship post their graduation, Amit entered the main kitchen of a fine dine hotel. “During that time, working for a restaurant or a small eatery was not in anybody’s list. The trend bloomed only in the recent past,” he says.

From Chinese to European to modern Indian dishes, Amit’s cooking style has evolved both in method and flavour. But when asked the kind he likes the most, he promptly says European. “I enjoy European cooking a lot; there is a lot of finesse to it. The presentation and art also play a major role in this style. As a matter of fact, the modernisation in various cuisines that we see today are all a transformation of the European style,” he says.

So, is modern Indian cooking similar to fusion food preparation?

According to Amit, fusion cuisine is a very misleading concept. “If you take makhini gravy and mix it with noodles, it becomes a fusion dish. But the minute you say fusion it is an open-ended discussion—there is no end to what you can mix and match. When it comes to modern Indian cooking there are two ways in which we work. One way to go about it is by taking international concepts and present Indian food in that manner. The other way is to take international flavours and mix it with Indian food,” says the 41-year-old chef who has an experience of over two decades in the culinary field.

After working in several fine dine hotels and travelling to various places to explore food and culture, he is now a food and beverages consultant. “Being a consultant includes responsibilities like developing unique concepts, kitchen setup, uniform designing, training staff and food photography. I have learnt a lot while working in different hotels and I pass on those lessons to the staff I train. I distinctly remember how I once put pepper powder instead of pepper corns in a hot and sour soup; it was during my initial days as a chef. Little did I know at the time that the powder would form lumps and float in the soup. As funny as it sounds, it is an important aspect which sometimes chefs tend to overlook,” he says.

Recently, Amit wore the new cap of an author after he released his first cookbook— Redefining Comfort Food With Amit Puri. The book is a collection of global comfort food with a lot of twists and flavour layers to suit the palate of the Indian consumer in particular. “These recipes have been accumulated over the years based on my experience of travelling to various foreign countries and also Indian cities where I got to taste some of the local flavours. I combined all of this and created my rendition of these flavours. Recipes in the book are categorised into soups, appetisers, main courses, rice, breads and desserts along with dips, seasonings and sprinklers. The best part is that you can easily make it at home,” Amit says. He calls the cookbook a tribute to his culinary journey; a testament to what he has practised as a chef. “Some of the recipes that have made it into the book are actually bestsellers at restaurants that I have consulted for. The photography for the book was done at three locations—Raipur, Bhubaneshwar and Mumbai—when my team and I were opening restaurants at these locations. It took me a year to conceptualise, compile and publish the book,” he says. Here are six recipes from the cookbook that are easy prepare and delicious to eat.

* Cutting your own hair isn’t as difficult as it seems

No matter how much effort you put in to clean up the house, your wife always manages to find a spot and point it out to you.

Go to the salon.

But jokes apart, a lot of work has been kept on hold because of the lockdown. Before the national lockdown was announced, I was to start work at restaurants in Mumbai, Baroda, Chennai, Raipur and Kolkata. The pandemic has affected the hospitality industry to a great extent and every city would have a different approach and response to this pandemic, depending on its situation. I’d need to review the situation of that city closely and accordingly strategise on a bounce- back plan for each of the restaurants.

1. To make tawa non-stick, rub and grease it with onion dipped in oil.

2. To avoid butter from burning, add half the amount of oil to the butter while cooking.

3. Instead of discarding potato skins, make chips out of them.

4. Store homemade paneer in water to keep it soft and fresh.

5. Add a couple of pinches of salt to your masalas in masala dabba to avoid lumps.

6. Saute the fresh methi leaves in very little oil and store for a longer time in freezer.

7. Use strainer to separate egg yolk with egg white.

8. Reserve lentil water and use it as stock.

10. Refresh stale bread by covering it with damp cloth and microwaving for 30 secs. Take it out and allow to come to room temperature.

If you were granted three wishes, what would they be?

* Travel the world and explore places, culture and food.

* Have a restaurant of my own.

* Work and be professionally associated with Jamie Oliver. His rustic style of curating recipes inspires me.

You’re given a minute in the supermarket, what are top five things you’ll have in your cart?

10 must-haves for every chef

1. Good quality set of knifes and a sharpening stone for maintenance

7. Spoon set, both wooden and silicon

A message to all cooks stuck at home

Be open to learning. Take recipes as inspiration and give your own touch to them. Use your resources well and be in touch with your seniors and colleagues. Try using every part of the ingredient and do not waste food. 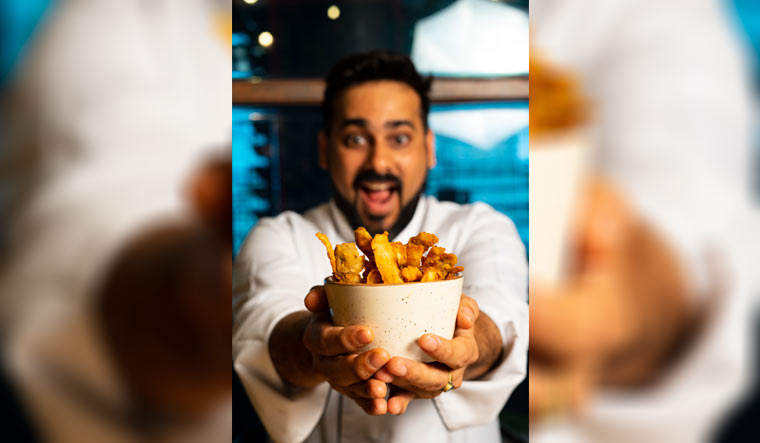 ● In a large bowl, add yogurt and dilute it with water.

● Add the potato peels to this buttermilk and allow it to soak for 30 minutes.

● In small batches, remove the peels from the buttermilk and toss them in the seasoned cornflour. Coat well and keep aside.

● Repeat till all the potato peels are nice coated with the seasoned cornflour.

● Heat the oil in a large pan and fry the peels till crisp and cooked.

● Transfer in a bowl and sprinkle generously with salt and pepper or any other seasoning of your choice. Toss well till all the chips are coated well with the seasoning. 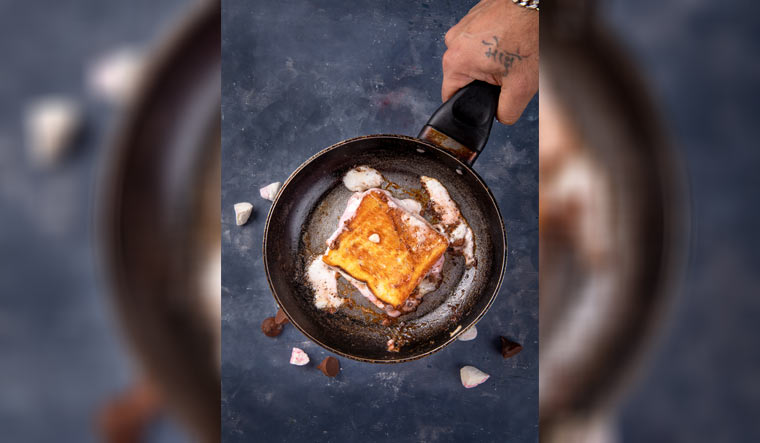 ● Make a simple sandwich of marshmallow and Hershey’s chocolate and a bit of crushed graham crackers tucked in between two slices of bread.

● If you are grilling this in a pan, place a little weight on the sandwich to get an even crust.

● Once the sandwich is grilled and crisp, butter the sides again and cut and serve. 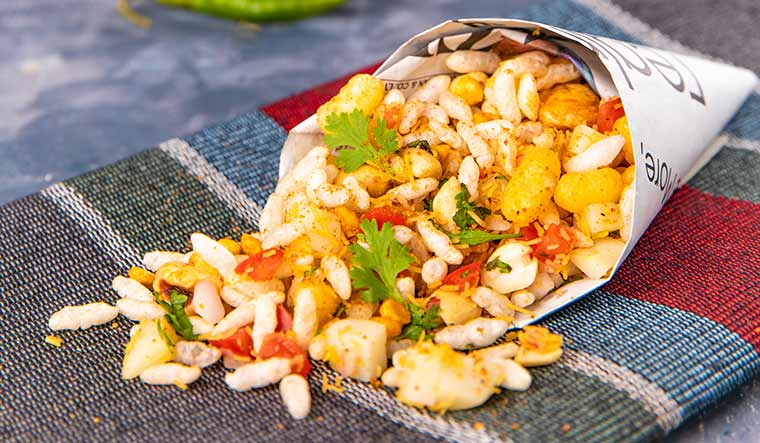 ● A pinch of black salt

● A pinch of table salt

● For preparing jhalmuri spice, dry roast cumin seeds and bay leaves on a pan till fragrant. Do not overcook them else they will turn bitter. Grind them to a fine powder once roasted. Mix the ground powder with the other ingredients and combine well. 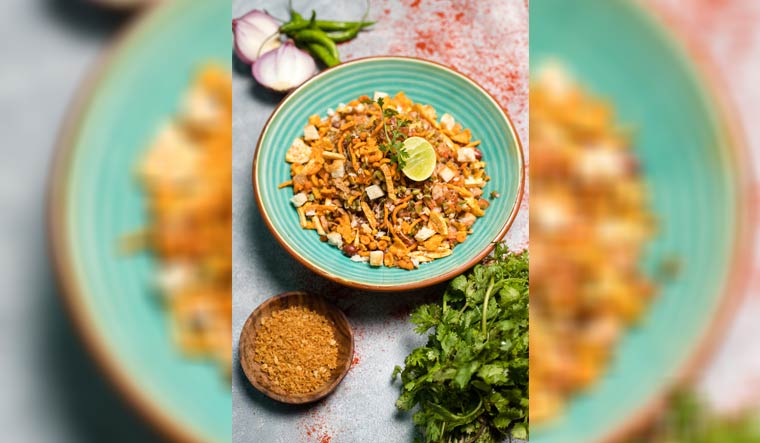 ● A pinch of chaat masala

● A pinch of salt and black pepper

● A bunch of fresh coriander leaves

● For dressing, combine all the ingredients together in a large mixing bowl. Whisk them until well combined. Store it in an air tight container and refrigerate.

● To make pav croutons, butter the pav and toast it in the oven or on a hot pan until crisp. Remove from oven or pan and allow to cool.

● To make the salad, combine all the ingredients in a bowl and add the dressing. Toss well. Transfer to serving bowl and garnish with pav croutons. 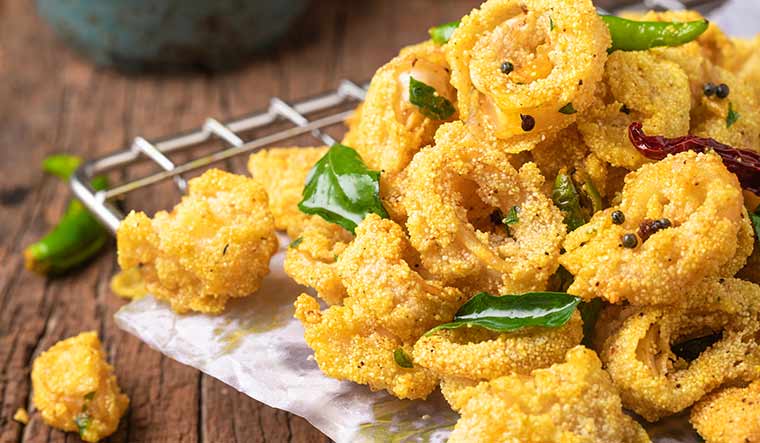 To marinate the squid

To toss the squid

● Marinate the squid rings in ginger garlic paste, lime juice and salt. Keep aside for 10 to 12 minutes.

● Dip the marinated squids in refined flour, then slurry and then coat them with semolina. Do this for all the squid rings before frying.

● To begin frying, heat the oil in a deep pan.

● The fried squid at this stage are perfect to munch on. But let’s take them up by a couple of notches and add a second layer of flavour.

● To toss the fried squids, heat a tablespoon of oil in a kadhai and add mustard seeds.

● Cook till they splutter.

● Throw in the green chillies, dry red chillies and curry leaf. Sauté for a few seconds and add the fried squid while they are still hot and crispy. Add seasoning, lime juice and fresh coriander.

● Give the squids a quick toss and serve hot. 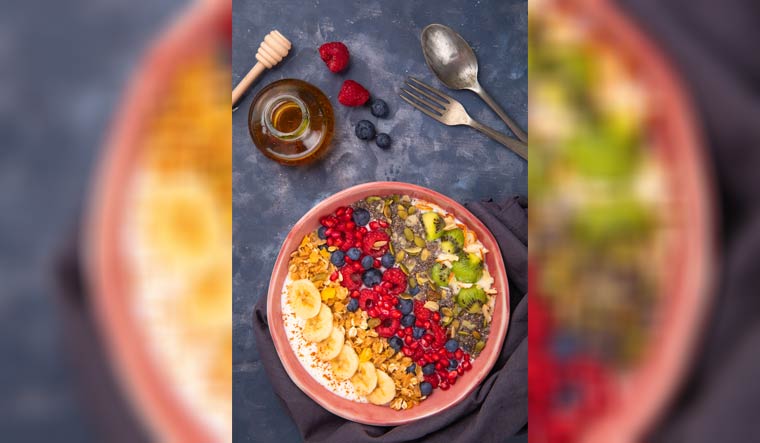 ● A pinch of cinnamon powder

● Whisk honey and chilled Greek yogurt together and pour this in a bowl.