Today, every historical seems like it was scripted at Nagpur headquarters of RSS

Last week I watched Mani Ratnam’s latest film and box office success, Ponniyin Selvan-1, twice. It is impressive in its scale, in the grandeur of its sets and costumes, its impactful cinematography, arresting background score, confident direction and star cast. Ratnam proves once again, with the flair of his craft and expertise in storytelling, that he is a master filmmaker.

PS-1 is restrained in its retelling of Chola history. It is realistic in its depiction of war, letting the audience feel how messy and chaotic wars are, and how the warriors must feel tired by all the fighting in heavy armour. The tone of Ratnam’s storytelling is somewhat dispassionate and removed. Ratnam’s perspective is that of history itself.

The success of the film points to the continued appetite of Indian audiences for scale and glamour onscreen. At the time of writing this piece, PS-1 has earned more than Rs400 crore gross worldwide. The film made me think about our obsession with history as an audience. The appeal of legend, historical tales and mythology (which is often confused with history in India) is universal and entirely explainable. People and communities need stories of who they were, where they came from, and how they got here to have a sense of rootedness, belonging and self identity. Present hardships are often softened with the knowledge that things were glorious in the past. Present-day collective anxieties can often be assuaged by the memory of a golden past and history’s cyclical nature. 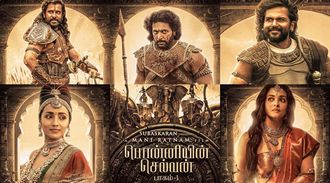 Hindi cinema, since 2014, has seen a palpable shift in the way history is presented. After Jodha Akbar (2008) and Bajirao Mastani (2015)—both inter-religious love stories that avowedly stood for the values of secularism, fraternity and unity in diversity above religious divides—Bollywood, suddenly, began to make historicals that were very obviously saffron in hue. Today, every historical seems like it was scripted at the Nagpur headquarters of the RSS.

A template is visible—Hindu upper caste warrior kings who battle evil, inhuman, monstrous Muslim invaders who are cruel, rapacious, lustful and wolf down large legs of meat in a manner that can only be described as a carnivore’s fantasy! These films only serve as furthering the bigoted agenda of the hindutva cultural project to suggest that Hindus and Muslims in India were always two cultures at war who have never co-existed and can never co-exist.

There is no doubt that both history and cinema are useful tools for those seeking political and cultural hegemony anywhere in the world. But, history is also uncanny and tends to spin out of control. And, at its core lies that undeniable little thing called ‘historical fact’—that has a habit of springing up sometimes decades later, sometimes centuries later, and undoing years of propaganda and revisionist history writing. Just ask the ghosts of Hitler or Stalin how they are remembered for their time on earth. Or ask Leni Riefenstahl, who is remembered as a genocide enabling Nazi propagandist and not as a documentary filmmaker. The examples are abundant.

Historical fact is like that grass from the revolutionary Punjabi poet Paash’s poem Ghaas (Grass)—“Main ghaas hoon; tumhaarey har kiye dharey par ugg aaoongaa (I am that grass, that will grow on each and every one of your deeds and actions).”

And, ultimately, while history may be written by the victor the cries of those who were historically wronged will always grow like grass over the manicured lawns of hegemonic propaganda. A popular Hindi film dialogue says, “Itihaas gawaah hai (History will be witness).”Manipulators of history, beware—history chooses her villains and heroes long after the players die, and you might not like the character you get!