Court has put hijabi girls in a quandary 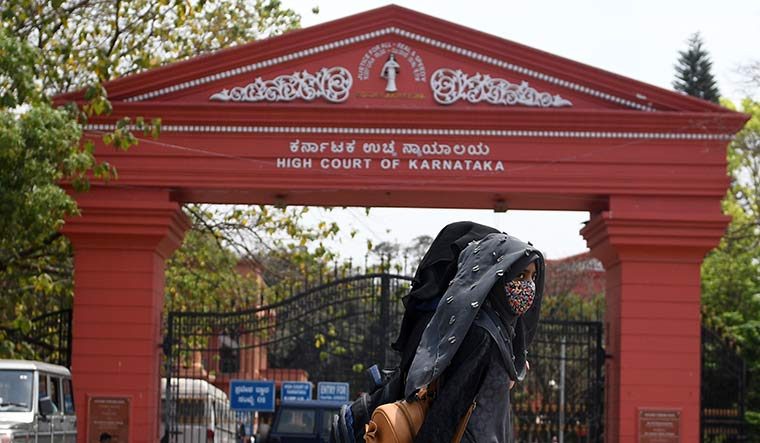 I remember when I was small and a slow eater, my father came up with a creative solution. At every meal, he would start telling a story from the Mahabharat or Ramayan but on the condition that he would complete the story only if my brother and I finished our food. In our enthusiasm for stories, we forgot our reluctance. The arrangement worked well—we ate healthy food and became familiar with great epics.

I was an emotional listener and would often be enraged at the injustice meted out to Eklavya, Vaali, Shambhuk, Garuda and Sita, or weep at Karna’s fate. But nothing made me seethe with anger like the story of the Game of Dice. Yudhishthira’s foolish loss, Draupadi’s eventual humiliation in a hall filled with kings and courtiers—wise, brave, responsible statesmen who were not man enough to raise their voice against such an obvious injustice.

As I grew to study literature, I was struck at the shameful irony of how a hall full of men debated on the nuance of whether a married woman was the property of her husband to be wagered in a bet, after he had lost his freedom!

Kamala Subramaniam’s retelling of the epic has simple but powerful dialogues. Draupadi on being summoned to court asks the question repeatedly, “Did my husband gamble himself away before he wagered me? How can a man who is not free gamble me away?”

The wise Bheeshma, the grandfather figure of the Pandavas and Kauravas, answers with a technicality—True, a not-free man cannot wager anything, but a wife is always the property of a husband even if he is not free. Draupadi answers, “It is no sabha where there are no elders, they are not elders who do not speak what is righteous, there is no righteousness if it there is no truth and it is not the truth when it is wedded to obstinacy.”’

These powerful words of a wronged woman came to my mind as the Karnataka High Court dismissed petitions filed by Muslim girl students seeking permission to wear hijab in colleges stating that “wearing of hijab is not an essential religious practice of Islamic faith”. Being neither an Islamic scholar nor a legal one my discomfort with this judgement is more like Draupadi’s question and comment.

How can a secular country, which guarantees its citizens the freedom of practising their religion, that guarantees freedom of expression and promises the right to education, deny women that very education because of what they wear?

If uniforms are more important than fundamental rights, why are Sikhs allowed to keep their turbans and beards?

If equality and justice are context-free bureaucratic rulings, why even have girls-only schools, women-only compartments in trains, and seats on buses?

Why start every school function with the lighting of a lamp, why let children wear janeus and maulis, why let Hindu women wear a bindi, sindoor, and mangalsutra in institutions of learning, after all, none are ‘essential religious practices’.

Moreover, should the interpretation of law be sensitive to culture and context, should it propel society to aspire for progress, should it be generous towards the anxieties of marginalised communities and first-generation learners or should it pander to the whims of the majority and the random diktats of mobs by nit-picking technicalities to let the majority express brute force by vulgar bullying of minorities?

The honourable court has sadly chosen the latter and offered a ruling that is devoid of empathy and vision whatever else its legal merits or demerits may be. It has effectively denied hijabi Muslim girls a chance at education by placing them in an unnecessary quandary—to choose between identity and education. It is not a choice a child in a secular and pluralistic country should be forced to make.

With the Ram Temple verdict, delays or non hearings of cases related to the Citizenship Amendment Act, denial of bail to Muslims in hate speech and Unlawful Activities (Prevention) Act (UAPA) cases, and this ruling on hijab, the Indian judiciary has disappointed many who are uneasy with the Hindu Rashtra project.

I think again of Vidur’s lament in the court of Hastinapur—“None so blind as he who will not see, and none so deaf as he who refuses to listen.”

Alas, the Indian judiciary is having a Dhritarashtra moment!