Indians have no real memory of the suffering war brings. So why the enthusiasm? 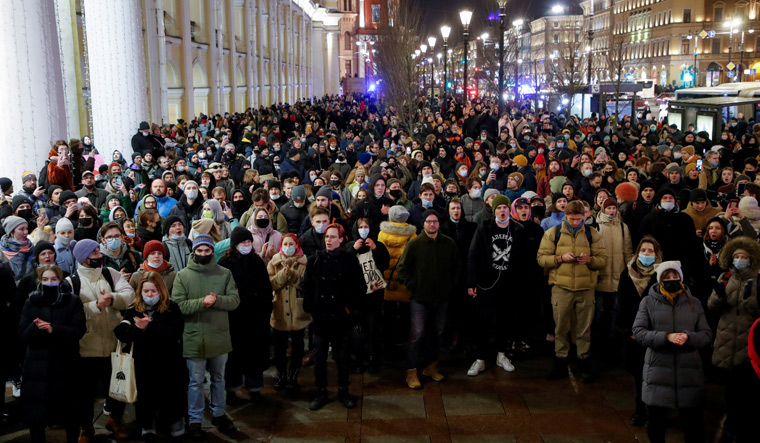 In 2019, I took a trip to Russia with two friends. We spent 10 days in Moscow and St. Petersburg and explored both cities on foot. While Moscow is a city stamped indelibly with Russia’s Soviet history, St. Petersburg has preserved the splendour of Romanov Russia. We saw anti-nuclear bunkers, Soviet-era buildings with bloody histories, the Kremlin, Red Square, St. Basil’s Cathedral, the Armoury Museum, the erstwhile Hotel Ukraine (one of the seven skyscrapers Stalin built in Moscow) and the beautiful Kiev Metro Station in Moscow. In light of Russia’s invasion of Ukraine, these memories are a reminder of how history is a tangled mess of inter-connections.

What stayed with this brown, south Asian tourist, who was once an avid history student, was how omnipresent the memory of World War 2 was in present-day Russia. The memory of ‘The Great Patriotic War’ has been preserved in public spaces in Russia through graffiti and murals on walls and sculptures. An eternal flame glows in memory of the unknown fallen Soviet soldier from WW2 in Red Square. This is not surprising because it was the Soviet Union that bore the heaviest casualties, cost, and damage of WW2, losing more than 20 million citizens to war or starvation due to war. Since the dominant narrative of WW2 is heavily influenced by western and English language discourse and India was an erstwhile British colony, much of our received knowledge of WW2 comes from American and British retelling. I had forgotten entirely that the most effective resistance to Hitler and Nazi Germany finally came from the Soviet Union, and setbacks on the USSR’s western borders began the final defeat of Hitler.

The visit gave us a glimpse of how personal the Great Patriotic War is for the average Russian. Our guide told us that there isn’t a single Russian family today who has not lost at least one family member of that generation in WW2. In St. Petersburg (erstwhile Leningrad) we took a ‘history walk’ with a PhD student working on the devastating Siege of Leningrad­—the 18 months when the Nazi army surrounded the city and attempted to starve the population, coinciding with the city’s harshest winter to date. We heard stories of people’s lives during that time, saw the measly single piece of bread that was the ration of the day if you were lucky, learned how people boiled and ate their belts and boot because the leather was after all from meat, and how every month 300 people were arrested on charges of cannibalism! The most heartbreaking account I heard was a diary entry of a 10-year-old child in Leningrad and the menu of his fantasy dream meal—simple soup and bread. To the starving child’s mind, it was a dream meal! We saw cat statues everywhere in St. Petersburg for they were considered the saviours of Leningrad because the abundance of corpses during the siege had led to a proliferation of rats and cats were brought into Leningrad by the same route that brought food into the ravaged city, to literally save it from drowning in rats!

I recall these stories of a nation whose people have suffered the ravages of war even as Vladimir Putin plunges Russia into an ill-advised act of aggression against Ukraine, even as common Russians take to the streets in anti-war protests. Many Russian celebrities have made public their anti-war stance. I compare this brave awareness of common Russians, risking incarceration to support peace, with the vulgar warmongering we see at any given opportunity in mainstream electronic media in India across languages; with some anchors dressing in army fatigues astride fake prop tanks! Such ignorant and foolish warmongering is rooted in the fact that Indian citizens have never suffered the effects of war in the way say Russians have. No Indian city has been bombed the way European cities or Tokyo and Singapore were in WW2. The brunt of Indian wars post-1947 has always been borne by our fauj on the borders and the families of deceased soldiers. We have no real collective memory as a people of the suffering and starvation that war brings. The enthusiasm that the average middle-class TV viewer and anchors display for war is rooted in ignorance of the actual effects of war, not in patriotism or nationalism.