Every year, towards the end of December, I take stock of how I spent the year, month-wise. Addicted as we are to our smartphones, I have found that the phone’s photo gallery is a great archive of the productivity of years passed.

I began scrolling through the pictures, starting January 2021. A few pictures of the family new year vacation showed up, followed by photos of bearded Sikh men. I had gone to the farmers’ protest in early January—a people’s protest that came full circle with Prime Minister Modi’s November 19 announcement of the withdrawal of farm laws. In a year that gave us much to grieve over, it was a happy reminder that the grit, resolve and determination of a united mass movement can make even seemingly invincible armour acknowledge its chinks. 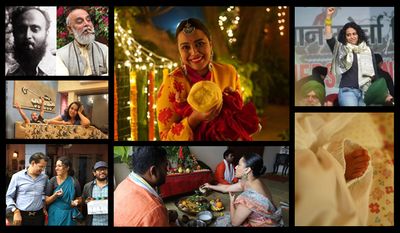 I scrolled through February and remembered the script readings and prep I undertook for a March shoot. But first, there was a gala celebration in Delhi for my father’s 70th birthday. We had a lot of discussion on whether to have a party, considering the pandemic, and the consensus was that it was a landmark birthday and deserved celebration. Plus, after the pandemic (some of us naively thought the worst was over), this was also a moment of collective gratitude that we made it out alive! I remember selecting an outdoor venue, keeping in mind contagion possibilities. Everyone was tested and everyone wore masks. Still the fear of hosting a potential super-spreader lurked! When no one tested positive two weeks after the party, we thanked our lucky stars.

March was spent shooting, and in early April, we commenced filming in Goa. Everyone had been tested, but on the third day, a co-actor developed fever and tested positive the next day. Everyone was quarantined and the shoot was called off. After a few days, all those who had tested negative returned home.

I came to Delhi and began to quarantine again in my brother’s empty apartment. On the second day, however, my mother tested positive and I went home to play nurse. In three days, eight people in two family households had Covid-19. And that is how I experienced the devastating second wave that soon engulfed the country. The virus united the country’s haves and have-nots in its indifference of criteria in choosing a victim. Soon a collective trauma made us feel more Indian than any Bollywood film, cricket match or political leader had managed to. Citizens stepped up where governments were failing.

Two and a half months, a generous dose of government callousness, lakhs of hapless deaths and a round of state elections later, the second wave seemed to be retreating, having satiated its hunger for corpses. We limped back to normal, knowing instinctively that nothing would really ever be ‘normal’ again. Not with the memory of loved ones dying, gasping for breath, and the guilt of our helplessness and inability to act staining our hearts forever. Everyone in our extended family had lost someone; dear friends had lost parents! Once my family recovered, I visited my bestie who had lost her beloved father to Covid-19.

July, August and September were spent moving back into my newly renovated house and recommencing the stalled film shoot. October saw the birth of my niece and toward the end of the year, the family geared up for the destination wedding of a cousin. And then, news of Omicron broke. Confusion, and a now familiar and tired panic set in. Should the wedding be postponed, reduced in scale, conducted at home or registered at a local court? The groom, my best friend, and the bride, my cousin, looked harassed as we weighed pros and cons.

“The Omicron wave hasn’t hit India yet,” I said. “Why write an obituary before the death? One has to be able to live a little?”

“We must learn to live strictly in the lulls between the pandemic outbreaks,” sighed the groom. “We will all have to tailor our lives to fit neatly between the various waves.”

I remembered my father’s birthday party, my niece’s first Diwali and then scrolled through Twitter to catch news of the last of the farmers emptying Singhu and Tikri borders, and I thought this is what 2021 taught us—to live a little, between pandemic waves.

Happy New Year, everyone. Hope we continue to find meaning, purpose, even joy and victory as the spectre of disease and death lurks on the periphery of our lives, like a relentless betaal latched onto the indefatigable Vikramaditya.