Recently, popular Indian comic Vir Das posted a video of a monologue he performed at the Kennedy Center in Washington, DC, titled ‘I come From Two Indias’. The piece has a fairly simple, but effective structure, where Das plainly states contradictory facts (and trends and collective habits of Indians), all of which are accurate and have taken place in present-day India.

“I come from an India where we take pride in being vegetarian, yet run over the farmers who grow our vegetables”—undoubtedly a reference to the Lakhimpur Kheri incident.

“I come from an India where we worship women during the day, and gangrape them at night”—a statement of India’s most basic cultural contradiction and most shameful reality. 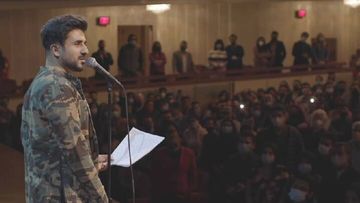 In reciting these obvious binaries, the piece often points to the hypocrisy of the now mainstreamed right-wing intolerance. Das takes sides openly, against this right-wing intolerance of any critique, dissent or expression of diverse identity or opinion; and declares unequivocally that the intolerant, hypocritical India is one we should be ashamed of.

The monologue has drawn mixed responses in India. Liberals have hailed it as art holding a mirror of reality in the face of an arrogant and dominant discourse of nationalism, but more than one feather is ruffled. Many feel that Das’s omission of caste-based violence is a blind spot, others find the piece to be elitist in tone while still others feel it was simply banal. But only one section has gone ballistic with abuse, threats and filing criminal complaints against Das for “tarnishing the image of India internationally”. Predictably, this group comprises people subscribing to the very same right-wing ideology that Das critiques in his piece, including members of the BJP.

I heard the monologue and wondered what was it that got the right-wing ecosystem into such a tizzy? Later in the day, I casually asked my gym trainer what he thought of the piece. “It’s fine, that’s his perspective,” he said, “but he shouldn’t have said those things in another country.”

I paused my squat lunges, remembering that I, too, had passed on three opportunities to critique the present-day Indian government at international platforms—an invitation to discuss India’s rape epidemic in Germany, an opportunity to present my views on the CAA-NRC protests at the American Congress and an opportunity to present the farmer’s side of the story in the Australian parliament. My reasoning had been the same as my trainer’s: “It’s okay to critique your country to other Indians, but don’t bitch out your country to foreigners.” Apparently, the bro-code of patriotism!

My trainer’s comments, however, got me thinking. What is the problem with critiquing your government on an international platform? Are not right and wrong universal ethics, and basic human rights principles of judgment?

I realised that our discomfort with “airing our dirty laundry” internationally stems from a false hubris, a misplaced sense of loyalty and a mistaken idea of patriotism. And then I remembered South Africa and Mandela. I remembered reading in history class that apartheid only ended when the reality of what was happening in South Africa reached the US and other developed countries. Today, the sanctions against South Africa are remembered as one of the instruments that dismantled apartheid.

I present this logic to my trainer who smiles and asks me to do another set of the damn lunge squats. As I struggle to push up, I have another realisation—the right-wing is reacting not just because it is an international platform, but because they agree with Vir Das. We come from two Indias and can be proud of only one. The right wing knows that better than us. And the India we (and they) are proud of is not their ‘New India.’

Das claimed to represent a great people who built a great thing that is turning into a memory. That memory is the old India. The India that refuses to go away. The India that persists. The India where a Hindu businessman quietly opens his garage in Gurugram to let Muslims offer their Friday namaz because hindutva goons have been disrupting their public namaz.

The right wing knows; they just do not want the world to know. I guess Das was right when he said, “I come from an India that will watch this and know that there is a gigantic joke, it just isn’t funny.”