Words ‘on camera’ actors live with daily. Words that mark the commencement of the recording of our craft for posterity.

I remember watching a Hindi film in Chanakya in Delhi back when Chanakya was a proud single-screen theatre and I was prepping for my arangetram; being struck by this play between distance and performance. I watched fascinated as the eye of the camera came so close to the body of the performer that even a twitch of the eyelid was registered. A small change in pattern of breath could indicate a tectonic emotional moment. I was both mesmerised and seduced by the intimacy the camera brought to performance. 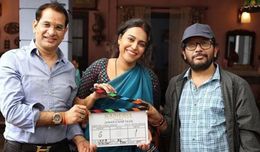 I came to Mumbai and began work as an ‘on camera’ actor. A few years in, I realised that this intimacy between the camera and the performer had more layers than I realised at first.

The experience of being seen constantly by a lens that is intimate but also intrusive does something quite fundamental to one’s sense of self. One feels seen—constantly. I began to notice that I live daily life also as if on camera. Almost as if there is a camera in my mind somewhere, and living life is a performance.

I remember one evening having had a terrible fight with my then boyfriend. I locked myself in my bathroom, sat on the pot lid lowered and began to weep with all the anguish of that young love, which is unadulterated by the cynicism that the next few years of adult life will bring. I could feel my chest aching and my lungs contracting rapidly with the rhythm of my sobs. And, then, suddenly out of nowhere—I remembered a story about a famous actor who lost his best friend in a road accident and while rushing to the street he crossed a mirror in the hall and paused to stare at his ravaged face. Not out of narcissistic vanity but for the awareness of an actor who wanted to know how he looks when he is devastated.

My sob caught in my throat and I jumped up and stood in front of the basin and stared at myself in the mirror. I looked at my face almost as if from another plane of consciousness—I saw how it creased and crumpled, how tears slid down my cheekbones. I noticed the shape my mouth took when I opened it to wail. I filed it all away for when I would have to shoot an ‘ugly crying scene’.

A while later as I composed myself, I realised that I had lost not just the love of my youth—I’d lost something more internal. My dalliance with the camera had seeped minutely into my psyche that no felt emotion or lived experience was free of it anymore. Nothing was untouched by the actor’s awareness, no emotion was pure in that it would not be referenced for a scene in the future. I felt overwhelmed at this person I had become. I realised I was Eve and I’d just taken a bite of an apple that had lost me my innocence, and that black hooded lens that stared at me every time I was on set—“Focus… sound rolling… camera rolling… action”—that was my serpent!