In age of phone camera, everyone is a performer, including criminals: Swara Bhasker

A lynching is no longer a new or unusual occurrence in “New India”. It has become something of a routine. A citizen—normally from a working-class background, generally Muslim, often dalit, in one case two Hindu sadhus, or on occasion someone accused of being a child kidnapper—is recorded on phone cameras, being thrashed by a group of people, pretty much always all men, and the videos then find their way onto social media.

The videos spark instant outrage, depending on the identity and issue fault line that the victim occupies. Social media users are outraged, pressure builds on local police, first information reports (FIRs) are lodged, and a few arrests are made.

But there is not always closure or justice.

In the 2016 Una flogging incident, a group of higher caste men tied dalit men to a jeep and flogged them while recording the incident. The video went viral creating a huge outrage, FIRs were filed, and 43 accused were arrested, 35 later released on bail. In 2018, however, the prime accused allegedly sought out the victims and thrashed them again, while on bail!

Last week, a video surfaced from Ghaziabad where a 72-year-old Muslim man is seen being thrashed by a group of men. According to initial reports—published and broadcast by a range of media platforms—in a written complaint to the police, the victim, Abdul Samad Saifi, had alleged that he was offered a lift by a group of men, who took him to a spot where they thrashed him, forced him to chant “Jai Shri Ram”, made him watch videos of other Muslims receiving the same treatment, and then chopped off his beard.

The video triggered huge social media outrage. I was among those horrified by what I saw and read about the incident. The Uttar Pradesh Police swiftly arrested a Parvesh Gujjar as the prime accused. It then claimed that the accused included three Muslim men, arrested them, and released a video about how the incident had no communal dimension, and that the thrashing and beard-chopping was a result of an internal dispute over taabeez (amulets) that Saifi had distributed to villagers.

Reverse outrage then broke out from right-wing social media handles calling for the arrest of the liberals and journalists who had tweeted the video and condemned the communal hate crime (including yours truly). The Ghaziabad Police promptly filed FIRs against Twitter, The Wire and six other individuals, all of whom happened to be Muslims (three of them were journalists). Another police complaint followed, against Twitter India head, some journalists and, well, me.

Soon enough, the fact that the case merited more investigation became clear, as journalists tracked down Saifi’s family. The brother of one of the arrested men claimed that the UP Police was tampering with the original allegations, was deliberately whitewashing the communal hate crime, and had arrested an innocent Muslim bystander.

The case is at the intersection of politics, technology, rule of law, and a shift in media patterns in today’s India. But, most importantly, it reveals the implications—and challenges—of being an aware and concerned citizen. 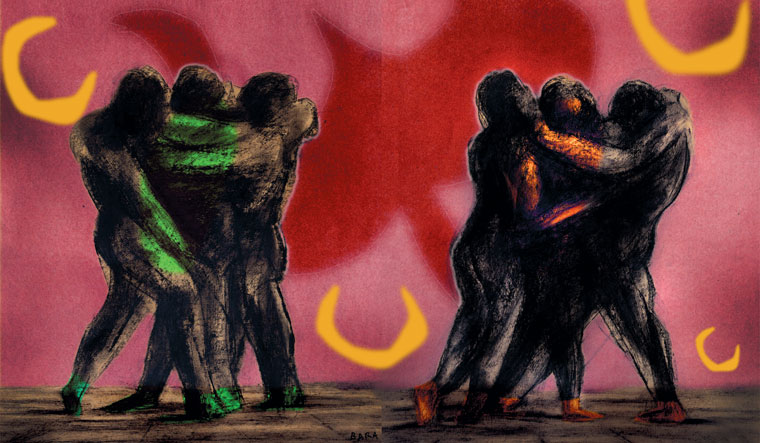 There is the obvious shameful fact—we are now a country where publishing or voicing support for the victim’s version of a crime is apparently a crime itself that can elicit an FIR against oneself. Also, the whole phenomena of viral videos of violence have transformed the experience of being a consumer of news, especially news related to crime.

Our times can be called ‘The age of the phone camera’. Everyone is a performer and the star of their own lives. Including criminals! It is shocking (or perhaps nothing anymore is shocking) that many of these videos surface in the public domain because the perpetrators or their supporters post them. Crime now, like everything else in our lives from a delicious looking dessert to the antics of our pets, is a performance.

And we, the ‘we-get-our-news-from-Twitter’ audience, are thus not simply an audience but also witnesses. And, as witnesses, we carry a burden. Do we witness a crime silently, feel momentarily disturbed but then go back to our offices and classrooms because even posting a comment about it could land an FIR against us? Or, do we, as involuntary witnesses, remember that governments will change, even laws will be re-written but the fundamental principles of humanity and collective morality and ethics will always be based on human empathy for all living beings.

This is the ultimate teaching of all our scriptures across religions. Empathy: the one thing that believers and atheists, rationalists and the faithful all agree upon. And, ultimately all demands for justice stem from empathy, because recognising injustice for what it is, is basically, an expression of empathy.

And, so, while right-wing bots and ecosystems may hanker for FIRs and call for arrests, representing the version of the victim is our ethical duty as concerned citizens and as involuntary participants of the crimes that we witness, even if unwittingly.