Connect with their uneasiness

I remember going for a trek in 2016 to the Kinnaur Valley in Himachal Pradesh. It was a 10-day trek that I had undertaken alone, with a group of total strangers as an exercise in independence—both from my close-knit support network of friends and family, and digital independence from constant access to social media, the internet and telecom! I knew what I was in for. It was announced on the website of the trekking company—gorgeous Himalayan vistas, day-long walks as we trekked from one mountain to another, pitching tents for the night and no mobile or data networks on our phones. As promised, an hour outside Shimla, as we drove to our base camp, we lost mobile and data network.

The Himalayas are spectacular and the Kinnaur Valley is surely among the most beautiful spots in the world. I had ample time to soak in my independence, reflect on life and make new friends. But every night before I slept, I would battle an anxiety—were my parents okay? Were my pets being looked after? Were they alive? Was my nani well? Was the boyfriend missing me? Was he not missing me? What if something happened to my parents? Or my brother, who was always travelling? How would anyone reach me? 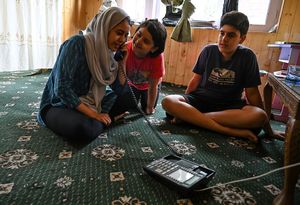 Every night these thoughts gave me palpitations and I prayed myself to sleep. On the seventh day, we finally reached the highest point. Sitting atop the snow-capped peak, every single one of us, had their cellphone in hand, aimed at the sky, trying to catch network! I caught both mobile and data network and anxiously opened the messages from family and boyfriend. Parents were well. Nani was fine. Brother was safe. Boyfriend missed me, and pets were alive and flourishing. One by one, I quickly called everyone, tearing up at the sound of the voices I loved so much.

When the national lockdown was announced, my greatest fear was whether the internet and telecom would be affected. Luckily, they remained untouched, and soon the internet became not just the national pastime but a national occupation. During the first two months of the lockdown, people turned to social media and internet-based content consumption almost like a crutch to help them get by the uncertainty, anxiety and emotional upheaval that such a decision necessarily brought about. I became an addict, literally spending days and nights surfing the internet.

Every night our immediate family, scattered over different parts of the world—Delhi, Mumbai, New Haven and Jakarta—assembled on Zoom calls to check in with each other. I had read on some ‘feel-good-guide-your-soul-with-positivity’ kind of website that one way to deal with anxiety was to list the things you feel grateful for, and to make a ‘gratitude list’. I began to do this couple of times a week and couldn’t help notice that in every gratitude list the numero uno place belonged to the internet.

One night I made my list, and my eye caught sight of an article on Twitter—‘Limited Internet too slow, too little: Kashmir’. With some circumspection I recalled that Kashmir had only just come out of a seven-month near total internet ban. Despite the fact that the Supreme Court had ruled that access to the internet was part of the fundamental right to freedom of speech and expression, the internet was still heavily restricted in Kashmir. I remembered August 5, 2019, when along with abrogating Article 370 and dismembering the state of J&K in a peremptory manner, the entire population of Kashmir was placed under a communication blackout. I remembered how a majority of Indians had cheered that, often in a vulgar manner. And, I remembered the anxiety my own voluntary 10-day communication blackout had produced in me. I couldn’t begin to imagine not speaking to my loved ones, not knowing how they were for 40 days! I wondered: how did we become a society that took delight in the totally relatable anxiety and pain of families, in the discomfort of the elderly and ailing, and in the heartache of an entire population? The answer is blowing in conch shells on the banks of the Sarayu in Ayodhya; but we don’t care to hear it.