Assault on our institutions will weaken the very pillars of democracy: Shashi Tharoor

As Constitution Day on November 26 was marked by a boycott of Parliament by opposition parties, it is worth asking what has become of the free institutions whose existence underpins our constitutional democracy.

They have atrophied. Financial regulators like the RBI; the judiciary, headed by the Supreme Court; the investigative agencies (notably the Central Bureau of Investigation); the Election Commission, which organises, conducts the country’s general and state elections; the armed forces; institutions of accountability like the Central Information Commission; the elected legislatures; and the free press have all come under a shadow.

Part of the reason behind this systemic onslaught stems from the Moditva doctrine of the ruling party and its inherently autocratic concentration of power. Moditva articulates a cultural nationalism anchored in the RSS political doctrine of Hindutva, on top of which it builds the idea of a strong leader, a man with a 56-inch chest, powerful and decisive, who embodies the nation and will lead it to triumph. 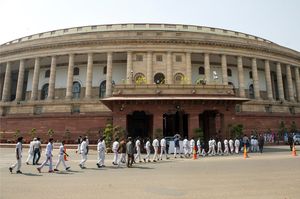 ‘Moditva’ depicts a fiery and articulate ideologue, projected as all-knowing and infallible, the hero on a white stallion who will gallop at the head of the nation’s massed forces with sword upraised, knowing all the answers, ready to cut the Gordian knots of the nation’s problems.

Autonomous public institutions threaten the dominance of the Moditva doctrine because they are independent institutions with specialised mandates that consequently challenge this oversized cult of personality. Naturally, the government has systematically sought to interfere with the independence that is a defining feature of these bodies.

India’s Election Commission has enjoyed a proud record of independence and boasts decades-long experience of conducting free and fair elections, despite its members usually being retired civil servants appointed by the government of the day for fixed tenures. While in the past, election commissioners have largely enjoyed a reputation for integrity, this has taken a severe blow as the result of a number of decisions in recent years.

The judicial system, traditionally above the cut-and-thrust of the political fray, has come under withering scrutiny, as has the repeated politicisation of the armed forces under the present government. The list goes on, from the Central Information Commission (which suffers a record number of unfilled vacancies, remains intentionally understaffed and whose salaries and terms of service can be altered by the government—a blow to the independence of the body), to the Central Statistical Organisation (which has been accused of manipulating data to make the government’s economic management appear less disastrous). A slew of governors have cast aside their constitutional mandate to sing to the tune of the ruling dispensation.

As for the ‘temple of democracy’, our Parliament, it has declined considerably from the deliberative forum it is supposed to be, to a combination of rubber-stamp for government bills, notice-board for official pronouncements, and theatrical stage for dramatic disruptions. Serious work still goes on in the committees, but these have also been undermined by the government’s disinclination to refer most bills to committee scrutiny.

A process combining intimidation and co-optation has weakened the press, ensuring that very few critical voices in the so-called ‘mainstream’ media are raised against such behaviour. Instead, the press largely serves as a weapon of mass distraction, purveying sensationalist and voyeuristic stories to take attention away from the government’s failures.

This does not bode well for the future of our Indian democracy. Political parties and ruling powers will come and go, but these institutions are the enduring pillars of democracy, whose independence, integrity and professionalism are meant to inure them from political pressures. If the assault on our institutions persists, the confidence that people have in these bodies will erode steadily and, in doing so, weaken the very pillars of the democracy that we take for granted today.