In the wake of the consecration of the Ram Mandir on August 5, critics have been suggesting that the Congress has caved in to the forces of hindutva, and that the minorities no longer have the Congress to speak for them. Nothing could be farther from the truth.

The Congress has traditionally furthered a brand of secularism that recognises India’s pluralism. It acknowledges a profusion of religions and beliefs, where all are equally respected and can peacefully co-exist. This is compatible with people being practising Hindus, Muslims, Sikhs, Christians, whatever. But this does not mean we will accept a weaponised political version of any religion, as the BJP has done by reducing the complex diversities of Hindu beliefs to the narrow-minded and exclusionary tenets of hindutva. As a party we will continue to resist any attempts by the ruling dispensation to promote such chauvinistic and divisive beliefs in the country, and we will stand by anyone who becomes a victim of their narrow-minded philosophy.

I believe that those who look at the Congress as a ‘BJP-lite’or ‘hindutva-lite’ do not take the Congress’s own assurances at face value—that it remains a party for all, the safest refuge for the minorities, the weak and the marginalised, and fundamentally committed to secularism. The BJP does not even bother to pretend that it has the interests of any of these sections at heart.

Our critics see the Congress’s distinction between Hinduism and hindutva as specious. They reject its leaders’ arguments that the Hinduism, respected by Congress leaders, is inclusive and non-judgmental, whereas hindutva is a political doctrine based on exclusion. They are quick to conclude that what the Congress offers is merely a watered-down version of the BJP’s political messaging. 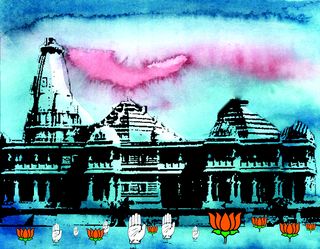 That is both inaccurate and unjust. Rahul Gandhi has made it explicitly clear that, for all his willingness to avow his personal Hinduism, he does not support any form of hindutva, neither soft nor hard. The Congress understands that whereas Hinduism is a religion, hindutva is a political doctrine that departs fundamentally from the principal tenets of the Hindu faith. While Hinduism is inclusive of all ways of worship, hindutva is indifferent to devotion and cares only about identity. Hinduism is open to reform and progress, which is why it has flourished for 4,000 years; hindutva is regressive, with its roots in the ‘racial pride’ ethos that spawned fascism in the 1920s, which is why it is unlikely to outlast its current peak.

There are more fundamental differences. Congress leaders profess a Hinduism that accommodates a vast amount of diversity and respects the individual and his/her relationship with the divine; the BJP’s hindutva prefers communal identity politics and seeks to Semitise the faith into something it is not—a uniform monolithic religion. Congress leaders’ Hinduism rests on Gandhiji’s and Swami Vivekananda’s ideas of the acceptance of difference; the BJP’s hindutva seeks to erase differences by assaulting, intimidating and subjugating those with other views.

I am not saying this as a party spokesman; I am not one. I am in politics because of my convictions. I genuinely and passionately believe that what the Congress stands for and offers the nation is fundamentally indispensable to the future of the country. We represent an alternate vision of the idea of India, an inclusive and pluralist vision that reflects truly the heart and soul of the country. The ideology of an inclusive and progressive party, liberal and centrist in its orientation, committed to social justice and individual freedoms, patriotic in its determination to protect national security and promote human security, still has great appeal if it is projected properly. We must not leave the national field uncontested for the BJP’s distorted, bigoted and narrow-minded version of what India stands for.