The recent contretemps over the leaking of a diplomatic cable has suddenly thrown light on the arcane art of diplo-speak.

The leak of a confidential cable from the British ambassador to Washington, Sir Kim Darroch, disparaging President Donald Trump as “inept” (and worse) in an assessment sent confidentially to his colleagues in London, created a brouhaha that resulted in his premature resignation, after the president refused to have anything to do with him.

The press coverage of the affair managed to give the impression that there was something irregular and inappropriate in Sir Kim’s choice words of contempt for the head of state and government he was formally accredited to. But the unfortunate Sir Kim was merely doing what all diplomats are trained to do, which is to speak politely and even flatteringly to their hosts, while reserving their real opinions and frankest language for the assessments they send back home. He was not the first diplomat to lose his job for doing his job, and he probably will not be the last. 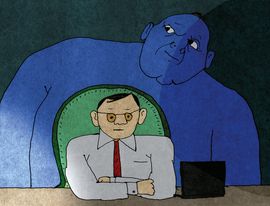 The fact is that what diplomats say in public and what they say in private are two completely unrelated things. As some readers may know, I spent 29 years as an international civil servant at the United Nations, which put me in the world of global diplomacy. Diplomacy is a very special profession, where no one openly says what they mean. So if a diplomat says yes, he means maybe; if he says maybe, he means no; if he says no, he’s no diplomat.

Diplomats usually think twice—before saying nothing. I used to joke in my UN days that if a diplomat ever called a spade a spade, we would soon have to issue a corrigendum.
The fact is that when diplomats have to speak, they are trained to be polite and placatory in their choice of words even when they are expressing the harshest ideas. It is been famously said that when a diplomat tells you to go to hell, he does so in a manner that makes you look forward to the trip.

A normal person, confronted with a lady who, to put it politely, would not win the Miss India contest, might say, “Look at that woman! She has a face that would stop a clock.” A diplomat would say, “Ah, that lady’s face would make time stand still.”

Rudeness is always avoided. You never say, “The two prime ministers disagreed bitterly over an issue.” You say, “There was a candid exchange of views.” Instead of saying, “The minister intends to do absolutely nothing about a particular problem,” you say, “The minister is deeply concerned.” The fact that he is concerned does not, of course, oblige him to actually do anything about the issue, but you leave that unsaid. That’s diplo-speak.

But when they want to be candid, few can beat the well-trained diplomat. When I was 21 and prowling the corridors of the ministry of external affairs to research my doctoral thesis on Indian foreign policy in 1977, I encountered the veteran Indian diplomat I.J. Bahadur Singh, who had by then already retired from South Block. He took an interest in my work and delivered a classic one-liner I have never forgotten. “International diplomacy, my boy,” he explained with a smile,“is like the love-making of an elephant. It is conducted at a very high level, accompanied by much bellowing, and the results are not known for two years.”

Much though one would like to believe that diplomacy has become more agile and sprightly since then, it’s still true that, as the French say, plus ça change, plus c’est la meme chose—the more things change, the more they remain the same. Diplomats will defend the status quo long after the quo has lost its status.

Which is why it reflects poorly on President Trump that when he discovered what the affable British representative in Washington really thought of him, he exploded and got him disinvited from various events and meetings. Realising that he could no longer do his job as effectively as an ambassador should, and despite the support of fellow civil servants at the British Foreign Office, Sir Kim gracefully bowed out, leaving it to someone else to repair the bridges he had unintentionally breached.

But the president should really have known better. The ambassador was just doing what all ambassadors do. If every confidential cable about President Trump was leaked, after all, there would not be a diplomatic corps left in Washington.

It is always wiser to take what diplomats say at face value, even while you know they are really saying something else behind your back. After all, is not that what all New York socialites do, Mr Trump?