Three historic Supreme Court judgements in recent months, all expanding gender rights in our society, have challenged the primacy of Parliament as the nation’s pre-eminent law-making body.

In its early years, the Supreme Court adopted a formalist approach in interpreting laws conservatively, whereas our Parliament adopted progressive laws. These included the provision of social security and workers’ rights through passage of numerous labour laws, removing social evils by reforming Hindu personal laws and allowing inter-community marriages through the Special Marriage Act, 1954, among other path-breaking legislation.

However, over the years, Parliament lost its revolutionary zeal and the Supreme Court transformed itself into an activist court, re-asserting itself in the last quarter-century. Judicial activism flourished as the court expanded its jurisdiction through public interest litigation—PILs are an Indian juridical innovation—and citizens directly approached the court to pursue social causes and to remedy violations of fundamental rights.

The Supreme Court essentially moved into the vacuum created by Parliament’s failure to take on bold legislation, principally because in India most laws are introduced by the government, and our governments were more focused on staying in power rather than in enacting social change.

Women’s rights became an excellent example of this. In Mary Roy vs State of Kerala, the Supreme Court gave Christian women equal inheritance rights, and in Vishaka vs State of Rajasthan, the Supreme Court issued guidelines to combat sexual harassment at the workplace. (In fact, Parliament only enacted a law against sexual harassment at the workplace in 2013, 16 years after Vishaka.) 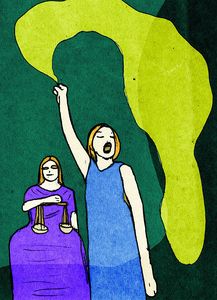 In the course of just over a year, the Supreme Court has asserted the right to privacy, nullified Section 377 of the Indian Penal Code criminalising LGBTQ sex, decriminalised adultery, and boldly reformed religious practices—de-recognising instantaneous triple talaq as a form of divorce (notably on the grounds that the practice did not give equal rights to men and women), and allowing women to enter the Sabarimala temple. In finding that the adultery law treated a woman as the property of her husband, the Court upheld the woman’s right to dignity and equality. By the same token it will not be long before it criminalises marital rape.

Such issues are often not addressed by Parliament for fear of antagonising voters, the majority of whom are assumed to be wedded to tradition. When I introduced a private member’s bill to decriminalise homosexuality, the Lok Sabha defeated it twice. Even a woman minister of the present government has had to back off from her campaign against marital rape, and now says somewhat sheepishly that criminalising it would be against the mores of society.

The irony is that in the past, Parliament has stood up to intense opposition from sections of orthodoxy when passing laws such as the Hindu Code Bills in 1956. Today, it is the court that argues that its duty is to apply constitutional morality, the ethos and principles of our constitution, and not societal morality.

I have argued in the Lok Sabha that legislators must also have the courage to enact laws through the lens of constitutional morality. Our Parliament must regain its position as an institution of social revolution, a role it performed from the 1950s to the 1980s.

The judges have shown the way. Now it is time for us parliamentarians to follow suit.