The 50-over format is going through an interesting phase.

Bilateral ODI series are seeing a steady decline in viewership. The sheer excess being one reason; the randomness without any relevance, the other. Also, after tasting the pleasures of T20 cricket, 50-over cricket seems just too long for today’s fans.

Almost half the game is about batsmen running ones and twos, which is never really entertaining for the crowd. And, because of the length of the innings, close finishes are very rare; even in this World Cup, real nail-biters can be counted on one hand. 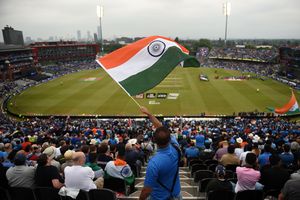 Flying high: The semi-final between India and New Zealand in Manchester | AFP

In T20s, well, every second game is a cliffhanger, and weaker teams compete better against strong teams. The shorter the format, the less the inequality. Afghanistan and the West Indies are great examples of this. The West Indies have, in fact, won the world T20 title twice, but have not won a 50-over World Cup in the last 40 years. Afghanistan looked like what they are in the longer formats—minnows.

ODIs are slowly and steadily losing their sheen, but here is where it gets interesting. The World Cups are getting bigger and bigger every four years. This time, too, it has broken all records of viewership.

The ICC is in a bit of a quandary. ODIs are losing their connect with the masses, but reach new peaks every four years when the world comes together.

Be that as it may, we have once again seen how the World Cup is such a special event. There is an ODI between two countries and then there is an ODI between two countries in a World Cup. And they are like chalk and cheese. We see high scores on a regular basis in general one-dayers, but come this World Cup, even with the small grounds in England, those kind of scores are not being seen.

Batsmen just bat differently when the match has the World Cup tag on it. It is the grain of anxiety that seeps in when you are batting out there.... “What if I get out?” The whole world is watching and there is so much at stake here. It is not just a defeat in a seven-match one-day series; those setbacks are forgotten two days later.

The stakes make all the difference. Fans can rattle off the names of the World Cup champs since the event started in 1975. It is at the tip of their tongues.

It is the same with bowlers. When it comes to bowling that 49th over in a close game, it is not just about controlling the line and length of the ball, but also about those jangling nerves as you run in. Yes, that cliche is so true. Events like these separate the men from the boys and that is why you see the truly established, class players topping the charts with runs and wickets. These are not just men with skills, but also those with a temperament of steel. Shakib Al Hasan, David Warner, Rohit Sharma, Virat Kohli, Mitchell Starc and Jasprit Bumrah, to name a few.

Another revelation that hit me as the World Cup went on was that, for a while now, since Dhoni and Virat became an integral part of the Indian team, I have been a huge admirer of modern-day Indian batsmen and their ability to chase down targets. In our times, it was the harder thing to do than bat first.

I remember our coach Ashok Mankad suggesting before an India-Pakistan game at Sharjah, “Let’s bat first.” He thought chasing against them in a highly intimidating atmosphere where there was massive support for Pakistan would take a toll on our nerves, and he was right.

And here I was seeing Dhoni, Virat and Co chase down scores nonchalantly.

But come the World Cup, the old adage came true—put runs on the board and watch the chasing team handle the immense pressure unsuccessfully.

In the 20 games before the semis, 16 were won by the team batting first, and it is not just because of the pitches.... Yes, you guessed right, it is because it is the World Cup!