Someone up there really likes cricket. In what is essentially a format that is likely to lose fans’ interest first, the 50-over cricket World Cup continues to drum up great interest around the world.

What’s more, two teams have suddenly bulked up and become serious contenders for the title—West Indies and Australia. Now, you have at least six teams with a very good chance of becoming world champions. Three months ago, Australian cricket was a shambles and we were lamenting that Australia, too, has joined the group of teams that had seen better days. 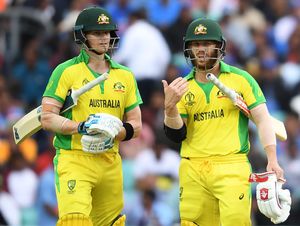 Then they came to India, beat India in a one-day series, in which they discovered a couple of impact batsmen. Then, two batsmen who were banned, joined them soon after, and Australia are now looking like a pretty rounded unit.

I am glad the Australian Cricket Board did not waste any time in getting David Warner and Steve Smith back in the team the moment their ban period was over.

These are two class players and this sport desperately needs as many quality players as it can have. Also, it was not like these two had fixed matches. They had done something, namely tampering the ball, that no country is innocent of. Even India has been caught in this act.

Why, even South Africa’s Faf du Plessis was caught twice tampering the ball and after his second offence he was made captain of South Africa.

The timing of this event was unfortunate for Warner and Smith. There was a general disapproval of player behaviour when this incident happened. It was like the last straw on the camel’s back. It also showed us that the Australian public does not mind the odd sledge. But, they do not like cheaters and that is what Warner and Smith were guilty of.

But it was still not fixing matches, a far graver crime. But you would think that is what Warner and Smith did! I mean, how dare English fans boo them?

England has its own culprits of ball tampering. One from their team who recently threw 15 punches at another human being in a drunken brawl is being lauded. Anyway, this World Cup is getting very exciting. In the first week, Bangladesh beat South Africa, and Pakistan beat England. Those results have just given us a teaser as to how all teams can be vulnerable and no one can be ruled out from scoring an unexpected win.

Pakistan and Bangladesh are not even among the top six contenders for the title, but they have already demonstrated that they can beat the big boys. So predict a winner at your peril, I say.

But, as a former cricketer, and now in the opinion industry, I cannot hide behind this fact that I am duty-bound to predict a likely winner and my vote goes to India!

Like all other teams in the fray, India, too, is not a team without vulnerability. India’s middle-order is its soft underbelly that could get exposed on a bad day. But why do I still pick India?

Because India has the best temperament among all teams, the ability to hold its nerves on the big stage. In M.S. Dhoni and Virat Kohli they have two players who create this culture in the team. The culture of playing on the biggest stage like it is just another game.

Host England is the in-form team with an excellent current record and a style of play which is ‘attack at all times’. But can they keep playing this way, when there is a world title at stake? 2019 will tell us.