The coach who runs the team

Ian Chappell once famously said that the only coach a cricket team needs is the one that takes it to the ground. My view is not as extreme, but I do believe that in cricket, a coach’s role is not as crucial as in, say, football.

I maintain that the most insignificant player in the cricket squad adds more value to the team than a coach does; if you want a member of the squad ill before a game, it rather be a coach than a player. The coach’s contribution is at best marginal.

Here is a very interesting detail. When India put in one of its best performances away from home, in 2007/8—that is when it competed superbly against Australia in Australia and went on to win the T20 World Cup—who was India’s coach? 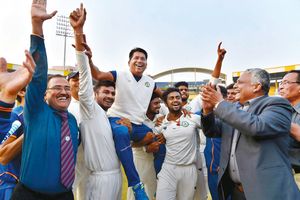 Lalchand Rajput. Not too many people remember this, nor was Rajput given too much credit for it because he is not a big name in world cricket and keeps a very low profile. Anil Kumble and M.S. Dhoni were the Indian captains then, and they were really the ones leading the winning efforts.

But, you know what, like with everything in life, there is an exception to this, too. It is Chandrakant Pandit, the current coach of the Vidarbha Ranji team. Before he took over as coach two years ago, Vidarbha was a nondescript first-class team. Since then, they have won the Ranji trophy twice and the Irani trophy twice. Coincidence? I don’t think so. Why? Let me explain.

Pandit, by nature, cannot play second fiddle to anyone, he has to be the ‘boss man’ of the team. When he was coach of Indian junior teams, which were putting up some impressive performances, I asked Pandit how much credit he would take for the team’s success. “80 per cent” he said.

There was a cheeky grin on his face. But he was being honest to me and himself, too, because that is what Pandit does. Unlike other coaches, he actually calls the shots in the team.

He is not shy about shouting out bowling changes and making field adjustments from the pavilion. Being a typical Mumbai street-smart cricketer himself, his tactics are sharp; the captain just executes his ideas without questioning.

No, Pandit cannot be a coach if Virat Kohli is captain, but his method works with teams like Vidarbha. He does not care about decorum, he does what he thinks will work. He is hard on his players and believes that if “I have a sharper mind and more experience than a bunch of 20-year-olds, why don’t I plan and they do what they can do best–execute.”

I can’t fault this approach, makes for a lot of common sense.

In fact, considering the misplaced, exaggerated importance given to most cricket coaches, why not actually give them more powers? Like it was tried way back in the 1999 World Cup by Bob Woolmer, the South African coach, why not have a constant communication line going from coach to captain?

In today’s world, where optics matter a lot, if a captain blunders on the field, the coach respectfully stays out of it, letting the captain rule in his domain, even if he is clearly making some bad calls. But Pandit will not allow such things to happen on the field. He will intervene right then and not after the damage is done and the team has suffered the consequences.

I know there is no one winning way, but Pandit’s way seems to be working brilliantly for one cricket team.