After winning the first Test in Adelaide, India lost the second Test in Perth. The four-match series is now poised 1-1. The Indian and Australian teams carry similar traits—quality bowling, but a fragile batting unit. That is why the result of this series is a hard one to predict. Both teams are living in glass houses.

Though India lost the second Test, there were a couple of high-quality performances from Mohammed Shami and Virat Kohli. Shami has had this reputation of being a ‘blow hot, blow cold’ kind of bowler for a while, but recently he has been mostly ‘red hot’ for India. In Perth, he picked up his second five-wicket haul this year, while Kohli got another high-class hundred, the only hundred in the match. 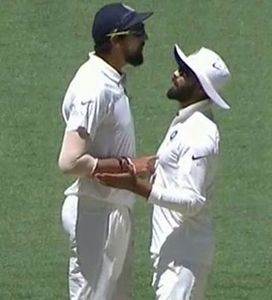 Common phenomenon: The squabble on the field between Ishant Sharma (left) and Ravindra Jadeja.

But you know what the fans and media were talking about after that match? The little squabble on the field between Ravindra Jadeja and Ishant Sharma.

Now such exchanges are very common in matches when you have mostly 20-year-olds, high on adrenaline, involved in a contest. Until now there may have been a million such minor altercations between players of the same team. This is not your Javed Miandad and Dennis Lillee coming-to-blows kind of confrontation. This was innocuous.

So why is it getting so much attention?

Because, now the television broadcasters have become more mischievous than the players.

While covering the match, they are carrying on a ‘sting operation’ of their own to catch players who are slightly out-of-line, and then share that footage with a hungry media. Thankfully, Indian channels’ cricket coverage is much more responsible.

Such controversy-driven TV channels are feeding gossip from the field and the media is lapping it up, and why wouldn’t they! There are soap operas running for years on TV, based on such themes.

Kerry Packer, the owner of Australia’s Channel 9, was a game-changer in cricket coverage. He introduced stump microphones for the first time. Packer wanted to enhance the viewer experience of watching cricket on TV—to give cricket fans not just the sight, but the sound of the game, too.

Taking the fan closer to the action was Packer’s idea. So, for the first time, fans at home heard what a non-striker on the field heard, the rustling of a fast bowler’s motion through the crease as he bowled. Viewers also got to listen to the scraping sound of a batsman’s shoes as they shaped up to play the ball. It all added to the appeal of the game. Stump microphones are even used to help umpires in decision making.

With Test cricket’s limited appeal these days, some channels are taking the short-cut to get people interested in Test cricket by using the stump mics technology to feed gossip that has got nothing to do with the game.

In the ongoing series in Australia, stump microphones were turned up full volume, all the time, even between overs, just to hear what the players are saying. Players, meanwhile, are still coming to terms with it. Some are aware of its presence and its potential threat, while others like Sharma and Jadeja are caught off guard.

How can eavesdropping on what is being said among players and then revealing it to the world be right? I am amazed players have not officially protested against this.

A very smart thing was done by a player recently to get rid of this intrusion. He started praising rivals of the match sponsors straight into the stump mic. The stumps mics went down immediately. I suggest Sharma and Jadeja do the same.