When it comes to safety, there is no country like England. ‘Safety first’ is their motto in all aspects of their lives.

I remember one incident when we were covering a World Cup game in 1999 in Taunton. It was an India-Sri Lanka game. Our broadcasting crew had left some of their equipment in the corridor outside our commentary box. A steward came up to our box and told our producer that the three little boxes and a camera stand in the corridor had to be removed as that area was a fire exit route and nothing should be kept there.

It was a spacious corridor and these were just a few pieces of equipment lying in one corner, coming in no one’s way. Our producer was too occupied with the ongoing game and ignored or may have forgotten the steward’s request. 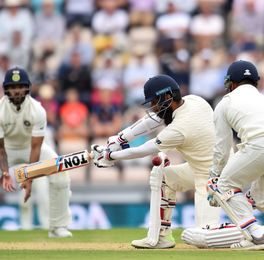 Ten minutes later, a policeman came into our box asking who the producer of this broadcast was. In no uncertain terms, he said just one thing to our producer: “Sir, if those items lying in the corridor are not removed in the next five minutes, I am going to put an end to this broadcast.” Our producer jumped off his seat, forgot completely about the World Cup match, and in two minutes had the corridor cleared. It is an incident I will never forget, as it tells you so much about a country.

When you fly an English airline, you will find their in-flight crew puts safety well above hospitality. They are passionate about safety.

This is all very good, but when your obsession with safety starts spilling over into sport, well, then it is not such a good thing. Take, for example, the ongoing Test series against India. They have a pure batsman called Jos Buttler batting at number seven. Yes, it is that preoccupation with safety. “What if our top order fails? We need to have a back up for that,” they think.

Their media and their experts keep harping on the fact that they have great depth in batting. “Even our number nine can bat,” they say. But, their deep batting lineup often fails and they struggle to put up big scores. It is a team that loses Tests at home more than any other top team.

When England selectors want to pick a bowler and they have a choice between two, they will pick the one who can bat even if he is slightly inferior to the other as bowler. Moeen Ali is a fine cricketer, whose main strength is his off-spin bowling. But, England expects him to bat as well, and when he fails with the bat, they are disappointed.

All their batsmen in this series have gone on record saying they would want to bat one position below their current place. This is again a sign of being defensive, and being safe rather than positive and courageous.

The history of this game has shown that the two sides that ruled world cricket for a span of time—West Indies and Australia—kept it simple. They picked pure bowlers and pure batsmen and one wicketkeeper. They trusted the purity of skills of a player to win them matches. They did not think, “What if our batting fails?” Instead they thought, “If our batting fails, our pure bowlers will bring us back in the game by decimating the opposition for an even lower score.”

England has never ruled world cricket, and never won a World Cup or a Champions Trophy, in all these years, which is a shocking statistic. It shows that ‘safety first’ in sport does not quite work, but by losing another series in England, it seems India is the only country out there to prove that it does.