My calendar can get pretty tight as a commentator, but whenever I get an offer to do commentary in the under-19 cricket world cups, I grab it.

It is nice to cover a comparatively low profile event, the hyper activity that goes around big event productions can get to you sometimes, so this makes for a refreshing change.

But, more importantly, it is very fulfilling watching young talent at the cusp of their careers, where in a matter of two years or so, they will become real stars of mainstream international cricket.

When this happens, it is a nice feeling. Because you have seen them at the under-19s as kids with big dreams in their eyes, you feel a certain kind of affiliation towards them, a soft corner perhaps. 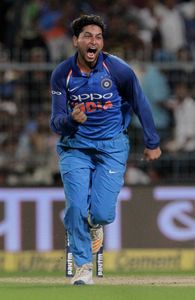 It is how neighbours must feel when that kid they have seen playing around, smash a few windows, goes on to become a Virat Kohli. The list is long, of under-19 boys I saw who went onto become famous household names, the latest in that list is India’s new game changer with the ball—Kuldeep Yadav.

I saw him in the under-19 World Cup of 2014, held in Dubai. I remember coming back from Dubai carrying images of two cricketers in my head. One of a tall, athletic fast bowler from South Africa with a beautiful action, running in and terrorising batsmen—that was Kagiso Rabada.

The other was that of a Chinaman bowler from India bamboozling everyone with his skills, yes, it was Kuldeep Yadav.

In a matter of just three years, Rabada attained top ranking in senior cricket and as for Kuldeep, well, just yesterday, as I write this, he picked up five wickets in a T20 International versus England. His stock as a cricketer is rising every day.

Actually I do not like him being called a ‘Chinaman bowler’, a term used in cricket for his kind, who bowl leg spin left handed.

There has been no great Chinaman bowler in cricket, so this breed is traditionally looked at as slightly freakish , more a novelty than anything, their skills are taken a bit lightheartedly.

Kuldeep is nothing of the kind. He is as pure as they come with sound fundamentals, just that he bowls leg spin left handed, he is a mirror image of the great Shane Warne.

The reason Kuldeep stole my heart in Dubai was because he was all I wanted a spinner to be. With batsmen getting stronger, hitting the ball further and the boundaries staying the same distance they were 50 years ago, spinners are bowling quicker and flatter. It is interesting actually to see fast bowlers bowl slow and spinners bowl quick to survive in today’s world.

Kuldeep is different, he holds onto the age-old belief that spinners must deceive batsmen by guile and flight, a theory rubbished by people saying it will never work in today’s power-driven game.

Kuldeep has proved them wrong. He has shown that deception still works, in fact it rocks!

It is just mind boggling to see Kuldeep sometimes bowl as slow as 73kmph and flight the ball above the eye line of the batsman, the kind of spin bowling you saw in the 70s from Bishan Singh Bedi and E.A.S. Prasanna.

So, basically Kuldeep is using the methods of the 1970s in 2018 to make a winning impact, and, that too, in the frenetic format of cricket—the T20s.

England decimated the Australian seam bowlers recently, but were like fish out of water against Kuldeep. Spin is still king, guys, and if you are as good as Kuldeep Yadav, the cricketing world is your kingdom.