When I got my IPL schedule, I quickly checked how many matches I was slotted to commentate on in Kolkata. It is interesting, right from my playing days I have always looked forward to my visits to Kolkata.

When I first went there as a player, I was dazed watching the adulation an Indian cricketer received. We would be put in that wonderful hotel, Grand Oberoi, which is located right in the middle of the city, in the epicentre of Kolkata’s chaos. There were hundreds of people gathered at the main gate of the hotel, which opened to the main road.

Obviously, these poor souls were not allowed inside the premises of the hotel. So, they would all huddle together outside the main gate just to catch a glimpse of an Indian cricketer, passing through that gate in his car.

As players, we could see their expressions when they looked at us. It was something I will never forget in my life. In the lobby of the hotel, there would still be a crowd. These were the more influential cricket fans who had the right ‘contacts’ to get up till there.

You do not see such scenes any longer, by the way. Today’s cricketers are bigger brands. But, I cannot say that they are more popular than players from the bygone era. 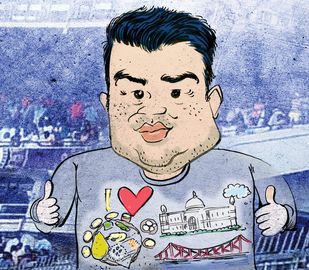 It was a heady feeling for a 20-year-old cricketer, to get this kind of attention and the pampering that came along with it. But, then I quickly saw the other side of this.

I once played a match-winning innings at the iconic Eden Gardens and the spectators there went crazy. I felt the full force of their love and fanfare. A few weeks later, I failed in a run chase, and, as I walked back to the pavilion, I could hear boos, and there might have been a few orange peels thrown at me, too. This was my early reality check, to not take fanfare too seriously.

They are quite unique, the fans at the Eden Gardens. Like most venues around India, there is always a pin drop silence when the opposition hits a boundary. But, at all other times too, there is generally silence here—fans sit still as a T20 match unfolds itself. Like you would experience in most other places, especially in Mumbai and Bengaluru, you do not hear the general noise that you hear when 50,000 excited people gather in one place. But, suddenly there will be an eruption of noise when their team has had a happy moment. After that, they go silent and still again.

It has got slightly left behind among Indian metros, but it is the old charm of Kolkata that appeals to me, I tell my overseas friends to visit Kolkata if they want to see the quintessential India. Bengal’s music, their food, wow! I adore them both.

Forget meditation, just listen to Rabindra Sangeet and that should take care of your stress levels. I win people over quite easily here, I just hum a couple of lines from it and they are my well-wishers for life.

Bengali cuisine, for me, is the best Indian cuisine. Perhaps because it suits me in the sense that it is not hot. Bengali food is not about putting hot, spicy masala and chillies in to make an impression. They opt for the more tedious ways to make food delicious.

Somehow I keep forgetting to carry an extra bag to Kolkata, to take home all the gifts and the Bengali sweets that I receive from all my ‘well-wishers’.

Manjrekar, a former cricketer, is a commentator.