Narendra Modi chaired a UN Security Council debate last week. That was the first by an Indian PM, and Modi did a decent job. He steered a debate on maritime security with the finesse of a veteran seaman, spoke like an old sea lord, and gave ideas like a statesman. 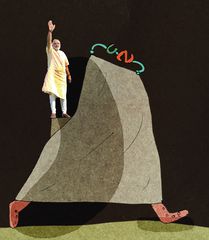 Our official spin doctors did not make too much of it—neither the PM himself nor his PMO, neither the foreign office nor the information ministry. All were restrained and dignified in their PR spins and claims.

That did not restrain Modi’s social media bhakts. They have since been setting the seas on fire making such claims as—this is the first time India is heading the security council; the command of the world is in India’s hands; Turkey and Pakistan are furious; blah, blah, blah.

Nothing of the kind, ladies and gentlemen, he-bhakts and she-bhakts! India is still a non-permanent member of the UNSC with no veto power, and elected last year for a two-year term like ten others. We have been elected thus seven times in the past. Every one of the 15 members (5 permanent, 10 elected) gets a chance to chair the council meetings for a month. The rotation is in alphabetic order. July was France’s turn; August is India’s; and September will be Ireland’s.

What is unprecedented is that the PM chose to preside over one debate during India’s presidency. It was a welcome departure. When a PM speaks, the world listens more intently than it would when a T.S. Tirumurti (the current permanent rep) or a Puri speaks. (No disrespect to the two men; both are diplomats nonpareil.) At a time when securing the seas is the biggest challenge after terrorism, Modi’s move gave political ballast to the debate.

Modi’s problem is not the Chinese, but his own bhakts. With false claims being made in his name, they are making him look like an ek din ka sultan (see tailpiece) in the eyes of the world. They have done it earlier too. When Turkey issued postal stamps depicting every one of the 35-odd PMs and presidents who attended a G-25 meeting, they posted on social media that Modi alone was thus honoured. They waxed eloquently about Modi being “uniquely honoured” with a statue in Madame Tussauds, not knowing that several Indian PMs, and even Pakistani rulers, had been similarly wax-cast.

With fans like these, Modi does not need foes like Rahul Gandhi or Mamata Banerjee. They will bring him more ridicule than the entire opposition and legions of left liberals together can.

Tailpiece: A water carrier helped Humayun, who was fleeing after losing the battle of Chausa, cross the Ganga on an air-filled waterbag. The grateful emperor thanked him by letting him sit on the throne for a day. The man nearly emptied the treasury by sunset. The incident gave rise to the phrase ek din ka sultan.