Why ban use of 'India', 'virus' in the same infected breath, asks R. Prasannan

Do viruses have nationalities? We know they don’t. Nor do they have citizenships, passports, Aadhaar or voter cards. Like birds, locusts, Vijay Mallya and Nirav Modi, they know no borders.

Viruses take varying shapes and show up wherever they please. One such avatar of the coronavirus was spotted in India a few moons ago, and the whole world called it the Indian variant. Many believe, apparently wrongly, that it is a worse killer than the variants that have been found anywhere else from China to South Africa. 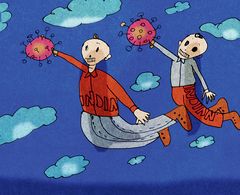 Stung by the bad name that the virus with a geo-tag is bringing to the land of the Golden Bird, the Narendra Modi regime has forbidden us from uttering ‘India’ and ‘virus’ in the same infected breath. It has also asked Twitter, Facebook, and such other platforms—those cyber entities that turn everything viral including toolkits—to delete, mask or manipulate all ‘India’ tags from the names of the virus or its variants. The police have slapped a case on Congress’s Kamal Nath for uttering the cuss phrase that names the virus and shames India.

Bravo, jai ho, way to go! After all, hadn’t the WHO, which looks after the health of the entire human race except that of Donald Trump, advised against tagging germs and diseases to places, people or animals in its 2015 list of ‘best practices’?

Indeed, but hold on. Aren’t we having double standards? Haven’t we, including our netas and mandarins, been gleefully geo-tagging germs to other lands all these days? We have been talking of a UK variant of the virus, a Brazil variant, and a South African variant, thus giving a bad name to lands inhabited by God-fearing and germ-fearing people. None of those people had objected, till Arvind Kejriwal opened his mouth about Singapore, and got an earful.

Not just in casual Kejriwal-style banter, but we have been geo-tagging germs in our sarkari statements, too. Want a sample? The health ministry’s statement released on December 26 talked of how our national task force had deliberated “on aspects related to current national treatment protocol, testing strategy and surveillance of SARS-CoV-2 vis-à-vis the UK variant strain.” It cautioned the good people of India that “the UK variant strain is implicated to cause increased transmissibility of the virus.” Search the ministry websites, and you will find more.

Let’s get off the high horse that we have mounted. All these locked-down months, we have been posting about the Spanish flu that killed millions across the world a century ago. Our epidemiologists are fighting Japanese encephalitis and German measles, hunting dengue-spreading aedes aegypti mosquitos, and telling us to guard against the guinea worm. Open any medical textbook and you will wonder whether scientists have been using the atlas for naming germs, flus, fevers, poxes, plagues and pestilences, in the manner we check Maneka Gandhi’s books for baby names—African trypanosomiasis, Crimean-Congo hemorrhagic fever, Ebola virus, Middle East respiratory syndrome, Rift Valley fever, Ross River fever, West Nile virus....

The WHO may say, they advised against geo-tagging of germs and diseases discovered only after 2015. Then who sanctioned the use of Brazil variant, South African variant and UK variant all of which were discovered recently?

Tailpiece: Most European regimes censored the news of a flu that was killing thousands during the World War I. Only Spain, which was neutral in the war, allowed free reporting. With the result, the rest of the world thought that only Spain was hit by the flu, and wrongly named it Spanish flu.