All quiet on the western front

Most of the world and its elder brothers in Washington believe that there is so much distrust between India and Pakistan that the two might go to war at the drop of a brass hat.

Modi, Modi, quite contrary. Peace is easier to make between India and Pakistan than war. The two armies simply have to talk to each other and agree on certain protocols, and presto the Line of Control would turn as quiet as a graveyard (pun intended).

The beauty of the thing is that the generals do not have to labour hard to prepare those protocols. They simply have to take out one of the several templates from their office cupboards. It happened last week; they took out the deal of 2003, and agreed to follow it. 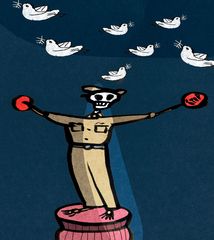 For those who came in late.... The Kargil war of 1999 and the flopped Agra summit of 2001 had led to much distrust between India and Pakistan. Then the attack on Indian Parliament almost led to a shooting war. India declared ‘no talks’ till Pakistan stopped sending insurgents. Things came to such a pass that it appeared the Islamabad SAARC summit would flop without Indian participation.

Backchannels got hyperactive, and the two armies agreed to a ceasefire on the LoC and in Siachen in 2003. The air of trust thus created led to diplomatic talks, a written commitment from Pakistan not to lend land under its control for fomenting terror against India, a successful visit by Atal Bihari Vajpayee to Islamabad for the 2004 SAARC summit, opening of new travel routes and a boom in mutual trade.

The Mumbai terror attack turned the air foul. The ceasefire deal began to be violated now and then. Then Modi got Nawaz Sharif to his swearing-in and sent him back with a shawl for his mother. Next, Modi airdropped with gifts at Sharif’s granddaughter’s wedding. Firing resumed full force (except in Siachen, where the ceasefire has held for 18 years) after Sharif’s countrymen came with return gifts to Uri and Pathankot in 2016.

But two weeks ago, Sharif’s successor Imran Khan took a fancy for flying over India’s Lakshadweep islands on his way to Colombo and back. The mandarins in our South Block were only happy to oblige, forgetting that Khan’s airspace managers had said no when Modi and President Ram Nath Kovind wanted to fly over the Hindukush a few months ago. Well, to sin is human, but to forgive is divine, thought Modi’s mandarins.

To cut a long story—and a long flight—short, Khan had a pleasant trip over the isles. Probably he fell in love with the lagoons. Soon his generals, who Khan reportedly reports to, began smoking the peace pipe. Can we have a ceasefire, they asked India through backchannels. Finally, the brass hats talked over the hotline, and agreed to hold fire.

Making the deal was no big deal. Both armies simply took out the 2003 template, and agreed to follow it in letter, spirit and saltpetre.

Come to think of it, it is a double saving for Pakistan. One, they saved a lot of turbine fuel by getting a shortcut to Colombo through Indian airspace. Two, they save a lot of money which they are otherwise wasting on bullets and shells while also reeling under the Financial Action Task Force sanctions. And who knows, perhaps they would also need a few million vials of the Covid-19 vaccines that we are making for most of the world.

What next? Diplomatic talks and then a Modi-Khan meeting? Too early to say. Khan has welcomed the ceasefire, but Modi has not tweeted a word yet. Perhaps he is waiting for the five assembly polls to get over. After all, you cannot breathe fire in campaign speeches while holding fire on the border.