Cantt have it their way

Cantonments, those vast stretches dotted with ‘grant bungalows’, Gothic churches and green meadows across which military men march in misty mornings or sweat it out in sultry afternoons, are in for some tremour. They may soon vanish.

The PMO is learnt to have asked the defence ministry to get responses from all of India’s 62 cantonment boards—whether they would like to continue their colonial-style march, or close shop and make money by merging with the melee of modern municipal politics of nearby towns. 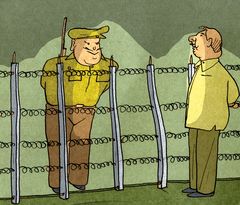 Voices are getting louder in favour of the latter view. Girish Bapat, BJP’s MP from Pune, created a storm recently by asking for the scrapping of all cantonment boards in India. Virender Kashyap, BJP’s former MP from Shimla, has asked for scrapping of the cantonments of Sabathu, Kasauli, Dagshai and Jutogh in Himachal. Secunderabad Cantonment Board has for long been in turmoil, with its chief, a brigadier, being taken to court, though on a different matter.

Even otherwise, most of India’s 62 cantts, as they write on railway signboards, are on extended political life. The elected boards of 55 have run out of their statutory life, got two permitted extensions of six months each, and are due for a natural death this month. They will now be run on executive orders.

We civvies often confuse cantonments with military stations. Military stations—there are more than 200—are secured areas where the armed forces run their establishments. You can be shot—and no questions asked—if you enter those places without a pass, permit or invitation.

Cantonments are semi-civilian local bodies, much like our municipalities with regular politics, protests and polls. The first cantt was set up at Barrackpore near (now in) Kolkata from where the British started ruling us, and the next at Danapur in Bihar. As their sway expanded over the rest of India, more cantts mushroomed. The idea was to locate the troops away from major towns so that they didn’t get ‘polluted’ by local politics, but not too far so that they could quickly march in to quell unrests. Loyal local worthies were granted land to build bungalows—still known as ‘grant bungalows’—and provisions were made for ‘camp followers’ to set up shops and homes.

Various cantonment acts gave them self-government status with boards to run them. The boards have equal number of politically elected members and military- or government-nominated members. But the ex officio head is the local station commander, and a civilian officer from the defence ministry’s estate office is always the chief executive and member secretary. Thus there is no way the elected reps can have their say or way, even when the military blocks roads or switches off lights.

The civilian citizens say they are doubly discriminated. One, within the cantts, the military gets preference on scarce resources including right of way through roads. (Remember the hullabaloo when Nirmala Sitharaman as defence minister ordered a few cantt roads to be opened?) Two, since the boards don’t have norms to determine APL or BPL, cantt citizens are denied most central, state or municipal welfare schemes. Moreover, the cumbersome lease and ceiling laws lead to delays in land transfer, house building or opening businesses, leaving cantt denizens poorer than their town cousins.

But critics of the civilian drive have another point—if the boards go, land sharks will despoil the vast virgin lands and raise concrete jungles there.