All that is Greek and Turkish

The Greek-Turkish conflict is the stuff of legends in the European imagination. It inspired poets like Lord Byron to take up arms (who said the pen is mightier than the sword?) and join the partisans. Their rivalry goes back to the Crusades or even earlier, turned intense in the age of maritime exploration, enveloped the classical and the romantic periods of European aesthetics, and continued into the age of world wars.

We in India had remained insulated from it, save for having been ruled by the likes of Elgin and Lytton whose families had been part of that European lore (see Tailpiece), and our freedom struggle getting entwined with the Khilafat movement after World War I. In the modern period, we watched with splendid indifference as Greece and Turkey became reluctant allies within the NATO, and Turkey joined the CENTO alongside Pakistan. Otherwise, neither Greece nor Turkey has been a factor or actor in our subcontinental politics, and none of our rulers showed any special love for either, except perhaps independent India naming a road in Delhi’s diplomatic area after Kemal Ataturk. 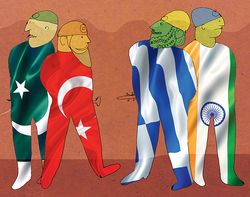 No longer so. We may soon be wading into the Aegean waters.

Turkey, whose state system was once hailed as the showpiece of extreme secularism, has been getting aggressively religious and nationalistic under President Recep Tayyip Erdogan. This is worrying the Greeks, who have quarrels with the Turks over the energy-rich waters of the eastern Mediterranean. Instead of seeking out Byrons to fight and Edgar Allan Poes to versify, the Greeks are romancing Narendra Modi’s India.

Their defence minister, Nikolaos Panagiotopoulos, recently dropped in the Indian mission, met Ambassador Amrit Lugun and “discussed issues of further deepening our bilateral relations in the defence sector”. The diplomatic grapevine has it that they explored the possibility of a couple of joint naval drills in the Aegean or the eastern Mediterranean to scare off the Turks. Late last month, Modi’s Foreign Minister S. Jaishankar video-called his Greek counterpart Nikos Dendias to chat about “a range of regional and multilateral issues.”

Why us? Well, who else when there are Pakistanis on the other side? Erdogan has been pretty cosy with Imran Khan of late, getting into arms deals, sharing military knowhow and even holding joint military drills. A year ago, Pakistan had sent its missile frigate PNS Alamgir and an Orion sea recce plane for an exercise with the Turkish Navy in the Mediterranean. Well, would the Indians not want to be there?

Modi too has been pretty miffed with Erdogan. The Turk raised the Kashmir issue in the United Nations last year; Modi countered him by meeting his enemies (the rulers of Cyprus, Armenia and Greece) on the UN sidelines, and cancelled a planned visit to Ankara. Then as Erdogan upped his military games with Pakistan, India signed a $40 million defence deal with Armenia and condemned Turkey’s military actions in northern Syria.

The strategic picture is changing in the Islamic Eurasia. The Arabs are beginning to shake hands with the Israelis and cutting down funds for religious work. Iran and Turkey have spotted a chance and are vying with each other to fill the vacuum, with Erdogan even dreaming caliphate dreams.

Well, who called Turkey the sick man of Europe?

Tailpiece: Viceroy Elgin (1862-1863) was the son of Thomas Bruce, the 7th earl of Elgin who carted away the marbles from Acropolis to “save” them from the Turks. Lytton’s (1876-1880) father Edward Bulwer wrote The Last Days of Pompeii, a fictional account of the Greek city that was buried in the lava from Vesuvius.