Too many ministers spoil the show 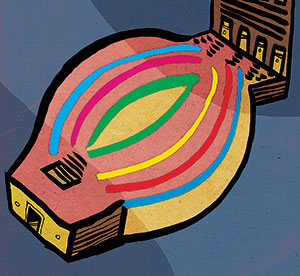 Narendra Modi does not believe in such old wives’ tales. He thinks a curse on ships does not visit the men who chart their course from land. He has changed the name of the ministry of shipping to ministry of ports, shipping and waterways.

For sure, Minister Mansukh Mandaviya and his officers have been “doing a lot of work related to ports and waterways” even earlier. The name change has not entailed any extra burden or budget for them.

Modi thinks they had been sailing through uncharted waters. The new nomenclature should act like a lightship that warns merchantmen against running into reefs and rocks. “Clarity in name will bring about clarity in work,” says Modi.

The ministry has for long been tossed around like a boat in a storm. Named ministry of transport and communications in 1957, it has been melded into, merged with and detached from road transport (sometimes surface transport and other times highways), civil aviation and even tourism.

Shipping is the fourth ministry that Modi has renamed, without changing the content. Weeks ago, he restored the old ‘education’ signboard to the human resources development ministry. Earlier, he had declared that the water resources ministry shall henceforth be known as jal shakti ministry which, literally translated, should mean hydro power. Then there is the agriculture ministry which Modi has modified as ministry of agriculture and farmers’ welfare.

Actually, do we have to list the entire charter of a ministry’s duties in its name, make them sound so prosaic, and waste space on their letterheads? Don’t our babus have the imagination to know that ships need ports to call at, unless they are pirates of the high seas? And think of the wastage that entails every name change. Thousands of signboards, tens of thousands of calling cards, and lakhs of pages of letterheads are simply thrown into the dustbin and new ones printed with every name change.

Talking of wastage, are we not having too many ministries? Former NITI Aayog vice-chairman Arvind Panagariya’s student Vishnu Narasimhan tabulated that India had a total of 53 ministries (and several more ministers). Article 72 of the Constitution limits the size of the council of ministers to 15 per cent of the strength of the Lok Sabha. That is about 80; Manmohan Singh once had almost that many.

One could understand when compulsions of coalition politics led to creation of jumbo ministries, but why today when we have a one-party majority? Most countries have lean and mean ministries, and they are ruled far better. The UK has 23, the US 22, France 16 and Germany 13.

The Second Administrative Reforms Commission, and several bodies before it, had recommended that India have only 25 ministries. Closely related departments can be brought under one ministry, headed by a cabinet minister who would be aided by ministers of state. Thus, one transport ministry could take care of road, rail, sea and air transport. Rural development, housing, urban affairs, and panchayati raj can be under one; so can be power, petroleum and natural gas and non-conventional energy. And do we need ministries for statistics and steel? Well, we had a minister for drinking water. Thank God, they didn’t think of bathwater.