Work from home or the house?

Lok Sabha Speaker Om Birla and Rajya Sabha Chairman M. Venkaiah Naidu are caught in a dilemma. How they will solve it should tell us a lot about the success or otherwise of Prime Minister Narendra Modi’s Digital India.

Don’t get me wrong. The lords of the two houses of Parliament are not being asked to pronounce judgements on issues of bandwidth, internet speed, mobile penetration or patronage to Mukesh Ambani’s Jio. Those are issues being handled by officials in the ministry of information technology who tell us that half of “we the people” of India are linked to the net. Jio Ho! 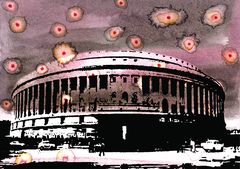 Birla and Naidu have a different task. The two gents have to decide how they will hold the monsoon session of Parliament.

With a Covid-19 lockdown, an economic breakdown, and a military drawdown being negotiated in Ladakh, the monsoon session is expected to be thunderstormy. Already, Congress non-president Rahul Gandhi has been tweeting fire and fury on Modi and his government, though most other opposition leaders are keeping their masked mouths shut.

How Modi will weather this monsoon storm is none of Birla’s or Naidu’s business. Their problem is how to hold the session itself.

There is a pandemic wreaking havoc in the country, and the virus is in no mood to vanish, vaccine or no vaccine. The Indian Council of Medical Research has given a deadline of August 15 to scientists to make a vaccine, ostensibly for Modi to announce it from the ramparts of the Red Fort. But wiser men of science say vaccines take their own sweet time to evolve, and that anything forced out from the test-tubes before time would end up like being Gandhari’s children.

But the houses cannot wait till the cows and the cow-poxes (which made the first vaccine) come home. Article 85(1) of the Constitution says, “The President shall from time to time summon each house of Parliament to meet at such time and place as he thinks fit, but six months shall not intervene between its last sitting in one session and the date appointed for its first sitting in the next session.”

Six months is 180 days, give and take a few days. Now, the budget session ended on March 23, and so the monsoon session ought to start on or before September 19—that is not just parliament protocol but the law. The Covid-19 protocol has it that people have to be physically distanced from one another. With 543 honourable MPs in Birla’s house and 245 in Naidu’s, neither knows how to seat them even a metre apart.

When they run out of laws, rules and norms, law courts and legislatures look to precedents. But neither Kaul & Shakdhar, who are the Manus of Indian parliamentary practice, nor Erskine May, who is the master of Westminster practices, is of any help. When the Great Plague of 1665 killed a quarter of Londoners, the British Parliament adjourned to the safer environs of Oxford. Not possible for us, with the whole of India being unsafe. But the staff have checked the enormous halls of the Vigyan Bhavan as a possible venue.

Another option is to improve on what the US Congress did when the Spanish flu hit them a century ago. They closed the public galleries. Birla and Naidu are thinking of seating a few MPs in the galleries.

A third option, being explored, is to have a webinar-style session. Several parliaments have already gone digital, partly or wholly. A few rules will have to be amended, which they can do in one sitting and then adjourn to their homes.

But are our MPs ready? More importantly, is the National Informatics Centre, which runs the government’s digital ops, ready? Therein lies the test for Digital India.