Whose Army is it anyway?

The foremost among the first category was the Election Commission. Do not say that again, the commission told the yogi. 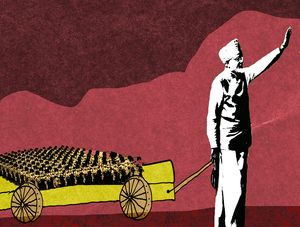 The most outraged among the latter was Union minister V.K. Singh. He said anyone who said so is an anti-national! That is the new swearword in Indian English.

VK’s love for the Army, which he had commanded, is well known. So much did he love it that he wanted to stay in uniform more than his age and the rules permitted. Sadly, the government and the Supreme Court saw through the camouflage.

If anyone can claim the Army as his, it is the President. He is its supreme commander, though the actual command is wielded by the cabinet headed by the prime minister.

Some of Modi’s men have been wearing their love for the Army on their sleeves. One minister spent a Diwali with the troops, another asked turnpike men to salute every passing trooper, one factotum was recently caught seeking votes wearing an army-style uniform, and a few put Abhinandan Varthaman’s picture on their election hoardings. Those who questioned these acts were called anti-national.

Finally the Election Commission issued a stern order—no military motif on poll posters. That ended what was turning out to be the charge of a phantom brigade of partisan patriots.

Modi has been professing love for the military but doing little, ceremonially or substantially. He has been extremely irregular, unlike any of his predecessors, at the Army day, Navy day and Air Force day receptions which the chiefs host in their homes.

Modi has been tightfisted too. Much is being claimed about having given three lakh crore rupees this fiscal for defence. The claim cleverly camouflages the fact that it was a less-than-seven per cent hike from last fiscal’s. The hike does not cushion the effect of military inflation which is always more than 10 per cent.

One-third of this three lakh crore goes for pay and perks, and another third for the regular running of the units and establishments. Only the remaining third—one lakh crore—goes for buying modern weapons. As a vice-chief, who has since joined the BJP, told a parliamentary panel last year, only eight per cent of the Army’s weapons are modern; 24 per cent are current and 68 per cent are old and vintage, whereas most armies have one-third old, one-third current and one-third futuristic.

Purchases have become mostly off-the-shelf buys, like the Rafales and Chinooks, with hardly any transfer of technology, rendering Make in India a poor joke.

Tailpiece: In feudal Europe, the king and the barons owned armies. Loyal barons lent them to the king in war, and rebel barons led them against the king. Once feudalism ended and national monarchies came into being, these armies morphed into regiments, but continued their feudal nomenclature. Thus there still are royal and non-royal regiments in the British Army.

With the arrival of the artillery, sea-going armed vessels and finally air power, the crown or the state claimed monopoly on them. Thus they have Royal Artillery, Royal Engineers, Royal Navy and Royal Air Force. But the army remains plain British Army.