Boys, it is said, will be boys. Not so long ago, Donald Trump boasted to Kim Jong-un that his nuclear button was bigger and more powerful than Kim’s; earlier Kim had boasted that he always kept his button on the table, which implies in Korean that it was too big to carry around. Mercifully we didn’t get to know the truth: they didn’t reach the stage of “you show me yours and I’ll show you mine”.

Last week, two super-rich grown-up boys, Jeff Bezos and Richard Branson, were playing rocket-rocket, while the third, Elon Musk, bided his time. Each player was out to prove that his rocket was bigger, faster, shinier and went higher. It’s difficult to say who won: Branson was off first to 86km, beating “Jeff who?”—as he referred to Bezos—by nine days. Bezos went higher, touching 106km and sniggered at Branson for not even crossing the Karman Line, the widely acknowledged beginning of space. They now call themselves astronauts, though the Federal Aviation Administration requires that they should have “demonstrated activities during flight that were essential to public safety”, and not just taken selfies. The astronaut wings pinned on their chests were made by their own companies.

Frankly, this was no front-page stuff. No Yuri Gagarin or Apollo 11 moments of global bated breath, no spacewalk, no space suits even. The brief weightlessness, like on top of a roller-coaster, was a trick; they were still under 97 per cent gravity. Their landing statements are unlikely to inspire generations: “What a day. What a day. What a day. What a day,” said Branson; “Best. Day. Ever,” proclaimed Bezos. They were what they appeared: two bored billionaires in mid-life crises holding on to flagging manhood; nobody missed the phallic symbolism of Bezos’s New Shepard rocket. 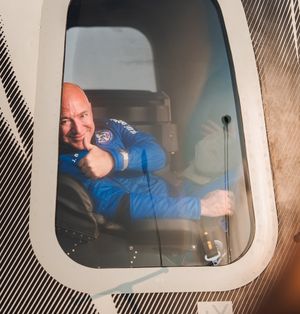 But the rich can assume noble attitudes: a small step for mankind’s future. To save an overburdened earth, we need to colonise space, the moon and Mars for starters. Human beings will be suitably engineered to survive: your cousin in a park-facing apartment on Mars may develop antennae, but he will get Amazon delivery. Planets will be “terra-formed,” or changed to suit humans. Musk helpfully wants to nuke Mars to warm it up; he’s made T-shirts to that effect. Bezos wants to move all polluting industry into space. The logic of destroying space to save the earth boggles the mind.

Given the deep philosophical and ethical issues involved in playing God, hubris is no solution for dystopia. Nothing in human nature inspires the belief that we will behave any differently in space than on earth, that we will not compete, corrupt and destroy. The thin Space Law regime needs serious overhaul before we hand over space to private buccaneers who don’t pay their taxes on earth, or even allow bathroom breaks for employees. For the moment, fortunately, this is just about vanity joyrides for the rich. Tom Hanks and Lady Gaga have booked seats at a quarter of a million dollars each and thousands, who don’t know what to do with their money, are in queue.

The truth is that at that distance the earth still looks beautiful. From the largest windows in space—again largest—of the Bezos capsule, the super-rich will only see an idyllic blue planet. They will not see the teeming millions, the hungry, the sick, the tormented. They will not see borders or wars that never end or refugees on rafts. Or ugly coal mines, or mountains of plastic. Or the dying Amazon, or villages without schools or hospitals. Their conscience will be clear, their egos sky-high, their money well-spent. That’s why rockets have an escape velocity.