A vaccine for all reasons

The Golan Heights hide their tensions well. The road sweeps languidly through lightly wooded hills past wetlands that attract millions of migratory birds. Wineries beckon, restaurants offer fresh catch from backyard streams and log cabins dot the ski slopes of Mount Hermon, only a few hours from the desert and the sea. Druze women in black robes and chalk-white headscarves sell fresh honey and cherries at roadside stalls or prepare traditional flatbread wraps loaded with labneh and za’atar.

One can forget that at Mount Hermon meet the borders of the enemy states of Israel, Syria and Lebanon. That vicious wars have been fought to wrest control of these heights. That the peaceful Druze, their religion shrouded in secrecy, are spread out in mountain villages of all three countries; they communicate with friends on the Syrian side through megaphones from an appropriately named Shouting Hill.

Things look different from Spy Hill; here, Israeli radars listen in to Damascus, an hour’s drive away. The buffer zone between Israel and Syria spread out below is patrolled by the United Nations Disengagement Observer Force to which India is a regular contributor. Smudged silhouettes of the ruined Syrian town of Quneitra are visible in the hazy distance. Reduced to rubble during the Yom Kippur War, Quneitra has been left as a stark memorial, all overgrown crumbling concrete, brightened only by the occasional white rose bush. The UN flag flutters at Bravo Gate, the border crossing; through this gate, Druze farmers export their apples to Syria under UN and Red Cross escort.

There are reports that a different kind of consignment may be coming the other way: the remains of Mossad’s legendary agent, Eli Cohen. Born an Egyptian Jew, he moved to Israel after the Suez Crisis. Cohen was recruited by the Mossad and sent to Argentina―he spoke Arabic with a perfect Syrian accent―to penetrate the rich Syrian expatriate community there. Posing as Kamel Amin Tha’abet, a wealthy businessman, he made powerful friends and moved to Damascus. Among his friends was Amin al-Hafiz, who became president of Syria after the Ba’athist takeover in 1963; Hafiz even considered making Cohen his defence minister. 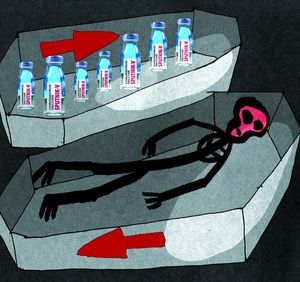 Cohen quickly infiltrated Syria’s highest political and military echelons, extracting confidences at his wild, boozy parties. In 1965, he was caught red-handed radioing messages to Israel and executed in a public square in Damascus; the intelligence sent by him proved critical for Israel’s spectacular victory in 1967 and its capture of the Golan. Despite Israeli efforts, the Syrians have refused to return his remains; no one knows where Cohen is buried and his bones were probably moved several times to foil Israeli rescue attacks. All the spy’s family has got back is his wristwatch, retrieved by the Mossad in 2018.

But this time there are hopeful signs: The fictionalised Netflix show The Spy has revived interest in Cohen; bringing back his remains would suit Benjamin Netanyahu in his nth election bid this month. Russia, a Bashar al-Assad ally, is a credible mediator. It earlier helped bring back the remains of Zachary Baumel, an Israeli soldier missing since the 1982 Lebanon War, and recently brokered a swap deal for the release of a young Israeli woman for two Syrian shepherds. Moscow state television has just aired an old clip of Cohen walking near the Syrian Air Force headquarters and Russian soldiers are reportedly searching cemeteries and caves around Damascus for the spy’s remains. All this could be part of the same broad arrangement; the sweetener is Israel’s offer to buy the Russian vaccine, Sputnik V, worth $1 million for Syria.

It seems that the silver bullet in 2021 comes in a syringe.