CNN’s fact-checker Daniel Dale, clarifying details after the Kamala Harris-Mike Pence debate, pointed out that the US Strategic National Stockpile contains enough smallpox vaccine for every American. Such preparedness against a deadly disease that was eradicated 40 years ago indicates a threat perception of epidemic proportions.

With our own vulnerabilities brutally exposed by Covid-19, and the debate on whether it was man-made not fully settled, we need to take similar heed. India stopped smallpox vaccine production in 1979. Approximately 900 million Indians, all those under 40, have no idea of the annual ritual of the vaccine-wallah heating a double-pronged needle over a small spirit flame and of the two tingling circles on the forearm. In short, they are unprotected against this disease, should it resurface.

Fears of a smallpox outbreak—intentional or accidental—are not entirely unreasonable. Live variola virus stocks are officially held only in two high-security labs—the Vector Institute in Novosibirsk, Russia, and Centre for Disease Control and Prevention in Atlanta, US. However, it remains possible that all stocks held by several countries were not destroyed or handed over—the exercise was based only on good faith. The two permitted stockpiles were also slated for early destruction but the decision was kicked down the road; the 2001 anthrax threat and 9/11 went in favour of retention of these stocks to enable better bio-defence. This retention carries the risk of accidental release or deliberate leakage.

Secondly, the disintegration of the Soviet Union left its research facilities in disarray, scientists without salaries and dangerous materials up for sale. Despite extensive American funding and surveillance to prevent leakage of Soviet weapons of mass destruction, it is possible that there are virus leftovers in forgotten freezers of former Soviet states. Even the venerable National Institute of Health in Maryland found virus vials in its stores as recently as 2014. 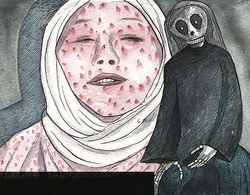 Thirdly, the high infectivity and easy transmissibility of smallpox make it an ideal bio-weapon; 18th century British colonialists gifted smallpox-infected blankets to native American tribes. More recently, the Soviet Union had weaponised a particularly virulent strain—ominously known as India 1 or India 67—including its aerial delivery, as revealed by the Soviet defector, Dr Kanatjan Alibekov; of China we know nothing. Biological weapons, despite prohibition, cannot be ruled out; the 1972 Biological Weapons Convention has no verification mechanism and efforts to negotiate one have failed.

Fourthly, the melting of the Arctic permafrost could revive the frozen virus from buried victims and finally, synthetic biology has made it possible for a rogue lab to re-engineer the virus, and make it deadlier than the original.

Anticipating these threats, several countries have built up national stockpiles of new-generation smallpox vaccines and the US has developed at least two anti-viral drugs. WHO itself has an emergency stockpile of about 33 million doses, the bulk in the form of country pledges, and has developed protocols for dispensing it to affected countries. It is clear that in case of a widespread outbreak, nations will prioritise their stockpiles for their own citizens and the multilateral stock will fall woefully short, especially if the US leaves the World Health Organization.

This is a good moment for India to review our preparedness: nationally, we should have a large enough smallpox vaccine stockpile, an ability to ramp up production and access to antiviral drugs. On the multilateral front, India needs to lead the efforts, as current chair of the WHO executive board, to ensure equitable access to the vaccine as a public good. After all, the virus stocks were held by Russia and the US not as national materials but in trust for all humanity.