Of borders, walls and barriers

A closely guarded barrier—part concrete wall, part fence—separates the West Bank from Israel. Palestinian residents of the West Bank can only travel to Israel through a tightly-controlled system of permits. For some years now, small groups from the West Bank have been permitted to travel for a day of fun at Israel’s famed beaches on the blue Mediterranean; the hope implicit in these efforts is that human contact with “the other” will ultimately foster peace. But, this year was different. Around Eid, thousands of Palestinians simply walked through holes in the separation barrier and across checkpoints while Israeli border guards, usually a picture of uncompromising efficiency, looked the other way. Enterprising taxi drivers, often booked on social media, took the families for day trips to Haifa, Tel Aviv and Jaffa where they frolicked on the beach and visited restaurants. At night, they crossed back through the breaches, Israeli army floodlights lighting up the path, and waiting taxis took them to their homes in Nablus and Hebron. Both the extent and the manner of the influx were unusual, even for the Middle East, where you expect the unexpected.

Analysis there can be plenty, but the point here is different—walls, borders, separation barriers are not forever. Political geography is drawn with chalk on a blackboard; when the hour changes, an idea runs its course, or a bell tolls, it is erased. And then drawn all over again. One can often scan old maps for familiar names and shapes of countries in vain: Poland, for instance, thrice partitioned, vanished from the map of Europe for more than a century. Successive maps of the Ottoman Empire, through the centuries, show its ballooning expansion and then its decline until, after the First World War, it was carved up like leftover cake by the French and the British, and the map of the Middle East, as we know it, was drawn. Ethnic, religious and nationality issues rest uneasily under imposed borders, and problems can continue to fester; the Balkans saw this, too, with first the creation and then the dissolution of Yugoslavia. 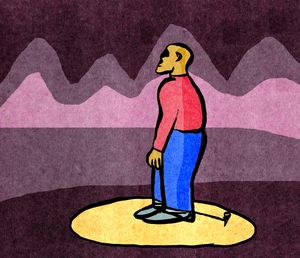 Some barriers can carry more drama than others. The Berlin Wall, built in 1961, snaked through the city that had, in the inter-war years, been a throbbing culture powerhouse. Heavily guarded by steely-eyed soldiers and guard dogs, the Wall became the focal point of clashing ways of life and a symbol of separation of family and friends. More than a hundred people died attempting to cross to the “free world” by crashing through the barriers in speeding vehicles, or climbing over the Wall. When, in early 1989, I last crossed Checkpoint Charlie, the iconic crossing point of the Cold War, I optimistically gave the Wall another fifty years; it went in just six months and the Soviet Union itself disintegrated a few years later, leaving 15 new countries in its place. Today, Checkpoint Charlie is a selfie spot, the once feared guard house is in a museum and the Berlin Wall exists on T-shirts and coffee mugs.

But it is still August, the month of India’s partition. In 1947, Cyril Radcliffe, a man with no previous knowledge of India, took just five weeks to draw a thick line through a complex religious and political landscape, dividing not just the land but the economies, history, religion and culture of Punjab and Bengal. The wounds of that separation still seep blood. When asked years later if he had acted in haste, Radcliffe blamed the leaders of the time, saying “they wanted a line before or on August 15, so I drew them a line.” And thereby hangs a tale.