Pandemic pictures have given way to visuals of spiralling protests against the brutal police killing of a black man. Pictures on instant television create quick inflexion points and change political narratives in minutes. It was not always like this: police brutality existed before today but news was not always so pervasive or accessible. For instance, in the world that once existed behind the Iron Curtain, a shadowy, snow-bound world of authoritarian regimes controlled by Moscow, it was difficult to come by hard facts. Political officers in embassies depended on BBC bulletins over the crackling short-waves and then discounted them for western bias.

In 1985, in Warsaw, Kevin Ruane of the BBC regularly analysed developments in three-minute bursts on my hardy Russian radio. Outside, the early winter days were short and gray. Cars lay hidden under piles of snow in parking lots. Tough small Fiats—the maluch—slithered and slid on the treacherous black ice. Poorly maintained heating systems croaked and cranked, tram bells clanged late into the snowy night and the Vistula began to freeze over. Virtually everything was scarce—in shops, the empty shelves stared back, pleading helplessness. Even diplomats queued up for rationed quotas of meat, butter, sugar, petrol and cooking oil. The best currency was a cheap French brandy called Martineau; the best gift a kilo of meat. People cajoled and bribed for essentials.

But political excitement throbbed just under the surface. The Soviet empire had slipped into decline; Gorbachev’s arrival bore early promise of a fresh breeze from the east. Poland was a bubbling crucible of change, catalysed by the nation’s particularities: Poles nurtured a historical antipathy towards Russia; the vast majority were practising Catholics; private agriculture and not collective farming was the norm. Solidarity, led by the charismatic Lech Walesa, had thrown down the gauntlet with the Gdansk shipyard strikes of 1981. Martial law had been imposed and lifted, though leading Solidarity activists were still in custody. General Jaruzelski’s regime, kowtowing to Moscow, lurched between weak concessions and repression. Anticipation lurked in stealthy whispers; coded signals were hidden in sermons. 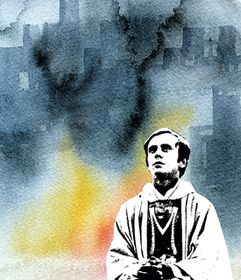 A Polish Pope—John Paul II—sat in the Vatican and his visits, with their sharply calibrated political message, inspired the Polish nation. The Church was Solidarity’s strong partner; a young priest, Jerzy Popieluszko, emerged as the poster boy of protest: thousands thronged the streets outside St Stanislaw church in north Warsaw to listen to his monthly mass. The priest’s popularity got under the skin of the security services and in late 1984 he was abducted, brutally assaulted, and thrown—gagged and bound—into a Vistula reservoir. A year later, on November 1, All-Souls Day, I visited his grave. The memory is vivid: hundreds of people, thousands of candles, Solidarity banners, the inevitable plain-clothes police and a huge rough granite gravestone.

Kevin Ruane later detailed the story of Fr Popieluszko’s assassination and the consequent trial in his book To Kill a Priest. Marked by his keen observation, deep research and the empathy that had earned him the trust of regimes and dissidents alike, the book brings to life a world of cold repression and the indomitable human spirit and shows how the murder hastened the fall of the communist regime. Kevin, a good friend, passed away in December 2018, in Australia, but by then the grim world that he and I had shared had long vanished: the Soviet Union had dissolved, the Cold War ended, the Berlin Wall torn down. Justice too had been served: Father Popieluszko was beatified by the Vatican in 2010 and put on the path to sainthood.