Grandpa buried his pa with his own hand, done it in dignity, an’ shaped the grave nice with his own shovel. That was a time when a man had the right to be buried by his own son an’ a son had the right to bury his own father.” So says Pa Joad in John Steinbeck’s monumental protest novel The Grapes of Wrath, as he digs a grave for his father even as the sharecropper family, like a thousand others, is on the road to California in search of work, driven off their land by the Dust Bowl, avaricious banks and mechanised agriculture.

In the end it is all about dignity: People reconcile to the inevitability, even the unpredictability, of death; but the details of departing trouble the mind. To die peacefully in one’s bed surrounded by loved ones and not in the tortured blue-white light of the ICU is an understandable human desire. As is the yearning for a decent farewell, or burial in a pretty spot, or immersion in hallowed waters. It is all part of the final compromise with the unavoidable. 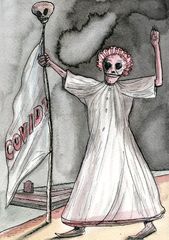 As in death so in life, men and women are at their most beautiful when they wear their dignity like a cloak that cannot be priced. When their values and convictions matter more than their bank balances. When they are remembered for what they did not for themselves, but for the needy stranger, the unfortunate other. When the hunger within them is for honest work and honest reward, for justice and fair play, for recognition of the humanity within.

Disease, like poverty, snatches at human dignity. Under the onslaught of Covid-19, hundreds are dying in the chilling anonymity of the isolation ward. Overcrowded burial homes are letting bodies decay in trucks in parking lots. Thousands are being given mass burials, each just a number on a television ticker. Fellow men are denying last rites to the dead for fear of infection. Children cannot attend funerals of parents; they watch them, like some surreal film, on Zoom.

We have also seen many journeys of sorrow. Like Steinbeck’s sharecroppers, India’s thousands, left without food, shelter or prospect “streamed in on the highways and their hunger was in their eyes, and their need was in their eyes. They had no argument, no system, nothing but their numbers and their needs.” Human dignity cannot survive when a twelve-year old girl, working in Telangana’s chilli fields, dies trying to walk home to Chhattisgarh. Or a young man collapses on the Agra expressway, walking from Delhi to Madhya Pradesh. Or when several migrants, including a toddler, die in road accidents like dogs and jack rabbits on Route 66 in Steinbeck’s novel. And still they walk on, bundles on their heads, babies in their arms, because even shorn of dignity they are human beings with “a hunger in a stomach, multiplied a million times; a hunger in a single soul, hunger for joy and some security, multiplied a million times; muscles and mind aching to grow, to work, to create, multiplied a million times.”

Amid the misery, let us salute acts of dignity: doctors risking their lives despite being spat upon, policemen cremating persons whose next of kin could not reach, the doctor colleagues who prepare a grave for Dr Simon Hercules with their bare hands, after a mob prevents a proper burial. These men and women are like Rose of The Grapes of Wrath; having delivered a still-born child, she saves a starving man by feeding him her breast milk. In that moment, she towers above human pettiness and greed. She becomes Mother Dignity herself.