Uorfi Javed has both beauty and a backbone

Ayoung 25-year-old girl is stealing the thunder from Alia Bhatt’s new baby, Katrina Kaif’s karva chauth and Deepika Padukone’s skincare launch. Her name is Uorfi Javed, and she gets you talking about her by simply showing up.

In one of her first talked-about appearances, Uorfi (she has dropped her last name) wore a frayed denim crop top that exposed a bright pink bra beneath. In other get-ups, she has worn a naughty cutout knockoff of a Kendall Jenner outfit, another time a sheer black top akin Bella Hadid’s risque number. She has worn bralettes to airports, dresses made of safety pins, razor blades, cassette tapes and cell phones.

Her clothes have been called outrageous, smutty, bizarre, and seem to be held together with a pin and a prayer. But they are also clever, tailored like couture, eye-catching, and matched with on-point makeup and hair. Last week, she wore a perfectly-dyed sheer T-shirt with hand-shaped crystals just about covering her breasts. Author Chetan Bhagat slammed her at a public event saying she distracted men who would hide under their blankets watching her Instagram reels. Uorfi savagely reminded him of his #MeToo WhatsApp messages that neither distracted the young girls he was texting nor broke up his marriage. Previously, she ripped apart snooty Farah Khan Ali who had called her fashion tasteless, by reminding Ali that her family sexualised women in their films constantly, so why the problem with Uorfi’s sexy clothes? 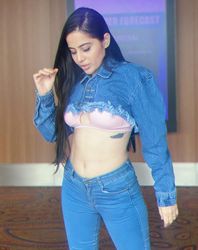 Uorfi, and her brilliant seamstress Shweta Gurmeet Kaur, are the finest example of the virality of social media. According to a survey conducted by a luxury market researcher in China, social media proves to be the top results-generator. Those born between 1997 and 2010 (Gen Z, or digital natives) are heavily influenced by what is on their feeds and that is how brands need to capture this emerging market.

Uorfi started playing with fashion once she was the first to be ousted from Bigg Boss. Last week, she was announced as dating reality show Splitsvilla’s latest wildcard entry, with a thumbs-up from none other than Sunny Leone.

A young mass communication graduate from conservative and cultural Lucknow, Uorfi is hardly the first to indulge in conceptual fashion. Remember Schiaparelli, one of Italy’s first couture labels highlighting surrealist fashion, who put Bella Hadid in a bare-chested gown at Cannes, with a necklace in the shape of lungs covering her breasts. Or Rick Owens, whose shows have often exposed male private parts. Or Balenciaga, the current fashion favourite that comes up with one peculiar idea after another, more recently a $1,800 leather purse that looks like a Lays potato chips wrapper.

Conceptual fashion presents the wearer’s authentic self, her mind map, and not the opinion or observation of others. One wears conceptual clothing for one’s own enjoyment or thrill, not to please a crowd. It is often statement-making. Lady Gaga wore a grotesque meat dress to a music event, to expose the US army’s ‘Don’t Ask, Don’t Tell’ anti-gay rules.

Looking good is easy; making a statement takes self-assuredness. Uorfi has both beauty and a backbone. Her fashion is an artistic statement, she is challenging the current crop of heroines and their idea of Insta-fashion, where an army of stylists and assistants are needed for every red-carpet and airport look. Uorfi attempts to break the trashy-when-poor, classy-when-rich mould, using the greatest equaliser of them all: social media.