I don’t think anybody in fashion would have missed the latest reality show on Netflix. Dubai Bling is everything reality shows chronicling the lifestyles of the rich and famous are—with lavish mansions, top brands, fancy cars, and a lot of pretend fighting. Except, no one does it bigger and better than the rich-man’s Disneyland, aka Dubai.

The show essentially follows the friendship of 10 Middle Eastern participants who come from the UAE, Saudi Arabia, Lebanon, Kuwait and Iraq. The format is similar to Bling Empire but, to put it geographically, ultra-rich Asians in the US are still cookie-cutter rich Americans. Dubai is possibly the most decadent place on earth; it makes Vegas look like a plastic toy and Versailles a pretty tart. Dubai built The Palm—a bunch of islands importing enough sand to fill the Empire State Building three times over; even Shah Rukh Khan has a mansion there.

The Empire State Building is less than half as tall as the dazzling Burj Khalifa. The Burj Al Arab is said to be the only seven-star hotel in the world, with airport transfers in helicopters and gold-plated iPads in every room. And lastly, for commoners like us to gawk at, Dubai’s cops famously drive Lamborghini Aventadors and Aston Martins. 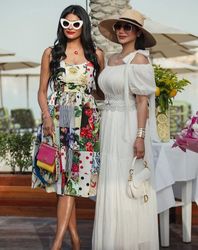 The main cast is deliciously beautiful. They wear couture feathers every day, gift their partners luxury apartments or a Tesla just like that, and wear three strings of solitaires for lunch. But what Dubai Bling has done, maybe unwittingly, is offer a new narrative of the wealthy Arab family. I mean, we all know they are crazy-rich and mad-ostentatious. The show, however, offers insights into their entrepreneurship skills, their modern marriages and their rather progressive manner of handling situations (spoiler alert: never mind a spilled coffee cup, there is actually a scene where a man takes the stage to publicly apologise to a woman).

Ebraheem Al Samadi is the richest of them all, owner of half a dozen companies, especially the Al Samadi Group and the Forever Rose brand of flowers that last a month. He started an e-commerce business at the age of 14, from his mother’s home in Florida.

Loujain Adada is the character we start off hating for her material pursuits. Her late billionaire husband was 35 years older than her, and in the first episode itself she says a man must be able to take a woman at least to Chanel. But through the season, she turns out to be a woman with her own mind, as women with a lot of money can often be, and finds that she does not need the support of a man when she turns down the proposals of Ebraheem and another suitor. Her girlfriends will do just fine.

Kris and Brianna Fade are a Lebanese-Australian and Mexican couple that is all set for one happy blended family; his daughters are giddy with happiness to have a new mother. Lojain Omran, a Saudi TV presenter and the wisest on the show, has 10 million followers on Instagram. Safa Siddiqui will give her husband a second child only if she gets an extra room for her wardrobe (it’s cute, it is!). And her friendship with Zeina Khoury is really what strong women friends can be like. No questions asked, just showing up for each other’s battles.

Zeina is my hands-down favourite, and I suspect, that of any working girl. She is the CEO of a luxury real estate firm and has a rock-solid marriage with a handsome man she barely sees. When a profile of his shows up on a dating app she is convinced it is catfish. She is an articulate, classy, boss-girl, and appears to be more strong-willed than any of the other cast members, male or female.

Of course, Dubai Bling is eye candy, but it also provides an important peek into a country and community of people we have only seen before through a prejudiced lens.