Sri Lankan army commander Lieutenant General Mahesh Senanayake dropped a bombshell on May 2 by disclosing to the BBC that terrorists who perpetrated the horrific attack on Easter Sunday had visited India. “They have gone to Kashmir, Bengaluru, they have travelled to Kerala state,” he said.

The general added, they “definitely” acquired “some sort of training” or would have made “some more links towards the other (foreign) organisations. By looking at the pattern of operation and the places that the leadership has travelled, there has to be some outside involvement of some leadership or instructions.” He hinted that Indian intelligence’s warnings about an attack were not helpful as they pointed “in a different direction… and there was a gap that everybody could see today”. 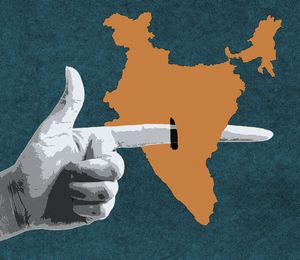 Senanayake is President Maithripala Sirisena’s henchman. Sirisena appointed him as army commander in July 2017 superseding others when he was about to retire. Senanayake, a graduate of the US Army Command and General Staff College, had fled Sri Lanka in 2010, while serving at the army head quarters in Colombo as major general. He was among retired general Sarath Fonseka’s loyalists whom former president Mahinda Rajapaksa suspected of planning a coup. He returned to Colombo only after the US-backed “regime change” in 2015, that brought Sirisena to power. Sirisena promptly reinstated him as military secretary to the president.

Surely, Senanayake’s loaded remarks must have put Delhi on alert —especially that part linking Jammu and Kashmir. Delhi has not responded, but a top intelligence officer reacted sharply disclaiming any information and insisting, “there is nothing to prove that any of the suicide bombers involved in the attacks in Sri Lanka had visited Kashmir in connection with any subversive activity or for obtaining terror training”. An official in the home ministry said in Delhi: “Sri Lanka has not shared any such information with us. More importantly, Sri Lankan security agencies have themselves ruled out this possibility after investigation.”

Did the general speak without Sirisena’s approval? Unlikely. Yet, while everyone is pointing fingers at each other, none of the obvious questions has been answered. How did a small, little-known Islamist group, previously known only for defacing Buddhist statues, mount a sophisticated, coordinated attack involving suicide bombers? And, how was it that the police, military and the intelligence services, built up over decades of civil war, took no action even after an Indian intelligence alert?

Plainly put, factions within the military-police apparatus might have turned a blind eye to the impending attack, or even have manipulated the bombers. Sri Lanka has a history of dirty tricks and state-sponsored crimes. Meanwhile, Sirisena has declared national emergency and given draconian powers to the military, including curbs on civil liberties and the media, powers to search and seize property, detain suspects without trial, impose curfews and so on. The democracy is indeed in distress in Sri Lanka.

Conceivably, Senanayake’s remarks on Jammu and Kashmir are aimed at throwing Delhi off balance, even as an acute power struggle is playing out within Colombo’s ruling circles against the backdrop of geopolitical rivalries between the US and China. Sirisena has accepted teams from the US Indo-Pacific Command and FBI to be stationed in Sri Lanka as “advisers”. Washington is exploiting the tragedy to strengthen its military and political influence in Colombo, while Sirisena is cornering his political adversaries—Prime Minister Ranil Wickremesinghe and Rajapaksa—by whipping up jingoism and pandering to Sinhala-Buddhist supremacism.