American author John Mearsheimer, in his book Why Leaders Lie: The Truth About Lying in International Politics, maintains that leaders do not lie much to other countries, and that democratic leaders are actually more likely to lie to their own people. He says it is difficult for leaders to lie to other countries because there is not much trust among them, especially when security issues are at stake, and you need trust for lying to be effective. But, it is easier for leaders to lie to their own people because there is usually a good deal of trust between them.

Prime Minister Narendra Modi’s speech at a rally at Latur in Maharashtra on April 9, dragging the Indian Army once again into the BJP’s campaign for votes, certainly exploited the people’s trust. Modi said, “I want to ask the first-time voter, can your vote be dedicated to those soldiers who conducted the air strike on Balakot in Pakistan? Can your first vote be dedicated to those soldiers who were killed in Pulwama attack?” 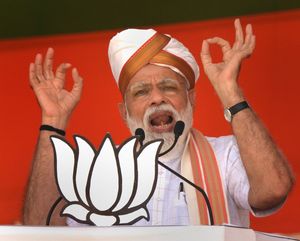 Modi’s Latur speech heralds the advent of post-truth politics in our country. Nobel laureate Harold Pinter once said that majority of politicians are interested not in truth but in power and in the maintenance of that power. To maintain that power, they consider it is essential that people remain in ignorance. “What surrounds us therefore is a vast tapestry of lies, upon which we feed,” Pinter said in his Nobel lecture at the Swedish Academy, Stockholm, on December 7, 2005. In post-truth politics, facts and evidence do not matter. The demagogue employs language to keep thoughts at bay, tapping into the fragile but essential compact based on trust between the government and the citizens. But, if trust goes, where does it lead us?

No doubt, Modi stooped low, for trust is essential in democracy. In our revolutionary age of communicative abundance, at some point, the citizens will get to know that in the first instance Pulwama should not have happened, so that Balakot would not have become necessary. Put differently, if Pulwama had been prevented, there would have been no martyrs, and no Balakot. Indeed, Mamata Banerjee’s troubling questions are hanging in the air, craving for answer: “Where were you, Modi, when the Pulwama attack took place? You knew that an attack was imminent. The government already had intelligence inputs. Yet, why were the jawans not airlifted? Why were proper naaka checks not done and why were the roads not thoroughly sanitised? Why did you push them to the brink of death? So that you could play politics ahead of the elections? There can be no politics over the blood of our jawans.”

Post-truth is not simply the opposite of truth. It has hybrid, recombinant qualities that mix in different ways and confuse its recipients—a bricolage of old-fashioned lying, clever quips, boasting and wilful exaggerations. In the hands of the powerful, it goes beyond winning votes or dealing with political foes. It has a sinister effect: it disorients and destabilises people, destroying their capacity to make judgments and turns them into playthings of power. That is why post-truth is regarded as the harbinger of a new totalitarianism.

Things boil down to the culture of democracy. Modi is adept at walking the fine line of the rules of the game, rendering the Election Commission speechless. But, a working democracy is not just about rules. It must also be felt in the blood and felt along the heart as values.