Diplomats find themselves in an unenviable position when they are expected to perpetuate a “frozen conflict”. This is indeed India’s diplomatic challenge today, downstream from the Pulwama attack. No one in the international community has cheered our “non-military preemptive action” on Balakot, including India’s staunchest supporters. The international community is aghast that the escalation could have led to a nuclear flashpoint.

This disconnect between the government’s triumphalism and the profound disquiet in the international opinion isolates India, especially among its small SAARC neighbours who feel uneasy about what happened in the region. Being a responsible nuclear weapon state means not only adherence to non-proliferation but also strategic restraint in behaviour. A sense of disapproval appears all over the western media and is captured in the headline of a devastating editorial by The New York Times last week—’This Is Where a Nuclear Exchange Is Most Likely. (It’s Not North Korea.)’ 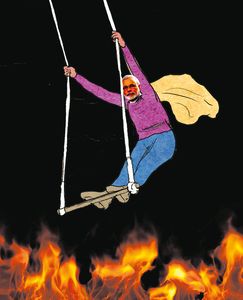 The NYT is an influential opinion maker and it accused Prime Minister Narendra Modi of “adding to the volatility… [by] waging a tough re-election campaign in which he has used anti-Pakistan talk to fuel Hindu nationalism”. The Indian diplomacy’s challenge today is also about coping with Modi’s Hindu nationalist metanarrative.

The world community expects India to settle its differences with Pakistan through dialogue. Delhi is inundated with mediatory offers. The US State Department claimed last week that Secretary of State Mike Pompeo “led diplomatic engagement directly, and that played an essential role in de-escalating the tensions between the two sides”. Of course, our lame duck government cannot make a U-turn. However, it is about time the foreign policy establishment anticipates the inevitability of engaging Pakistan. But then, Modi’s election campaign prioritises that tensions with Pakistan must remain in a state of animated suspension till May 22.

Yet, the government’s grandstanding apart, there are no signs that the shock and awe that it claims to have administered to Pakistan is actually felt so in that country. On the contrary, Pakistan retaliated by attacking India. The mainstream Indian opinion is deeply sceptical about Pakistan’s willingness to mend its ways. Meanwhile, the Afghan endgame has made Pakistan the indispensable partner for the US, Russia and China alike. A special envoy from Beijing said last week in Islamabad that the two “all-weather strategic cooperative partners… have always firmly supported each other on issues concerning each other’s core interests”. Clearly, the Wuhan spirit has evaporated into thin air.

Suffice to say, India, the victim of terrorism, is coming under the siege of world opinion to engage with Pakistan in dialogue, while Islamabad takes the high ground and speaks the language of peace. Incredibly enough, the NYT editorial underscored that the US “could encourage India to modify its approach to those opposing its rule in Kashmir, which… involves widespread human rights abuses that simply spawn more militants”. The politicisation of national security issues and putting hindutva on steroids has only weakened India’s case that terrorism is its core issue with Pakistan.

The government succeeded momentarily to shove under the carpet its appalling incompetence in handling the situation in Jammu and Kashmir through the past five-year period and the massive intelligence failure that caused the Pulwama tragedy. But, can realities be wished away? Under Modi’s watch, India’s cauterised Kashmir wound is turning gangrenous.