These are extraordinary times in Indian politics with a fateful poll looming. Everything adds to the grist of the Indian politician’s mill, even if he happens to be the incumbent prime minister. Stoking the fire of jingoism comes naturally to nationalists at the time of elections, but to drag into it the laying of the foundation stone for the greenfield airport at Hollongi near Itanagar and the inauguration of an upgraded airport at Tezu on February 9 in Arunachal Pradesh was rather excessive and provocative to the Chinese.

PM Modi claimed that this was probably the first time an airport was being inaugurated in a state while the foundation stone of another was being laid on the same day. Is that a big deal for a big country like India? The PM said that, with the Tezu airport’s upgrade at a cost of Rs125 crore, the fruit and flowers of the region could now reach any market of the country in a few hours. 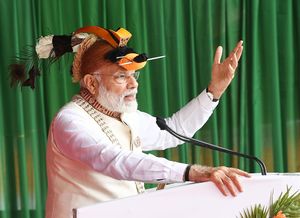 Prime Minister Modi during his recent visit to the northeast

But, granting all that—even assuming that Indians have the purchasing power of Germans who buy flowers and fruit airlifted from Israel—the fact remains that the event could have been left to the next government, and that would not have jeopardised India’s claim that Arunachal Pradesh constitutes an integral part of the country.

Unsurprisingly, China reacted. The foreign ministry in Beijing took note almost in real time, signalling the level of sensitivity, and warning that such actions “may lead to the escalation of disputes or complicate the boundary question,” apart from being contrary to the common interest of the two countries to “cherish the momentum of improvement in bilateral relations”. The statement stressed their expectation that Delhi will “respect the interests and concerns of the Chinese side”.

The oblique reference to the Wuhan summit between Modi and President Xi Jinping last April conveyed a message that goes beyond routine expression of disappointment. Does it mean that the wheel has come full circle since Wuhan? The needle has been moving in that direction.

The default setting followed the notion gaining ground in our strategic community that the US and China are on a contentious path and competition has intensified, which works to India’s advantage. The US’s success in mitigating strategic tensions with China is unlikely in the near future. But then, it remains uncertain whether the US is willing or is focused on engaging in sustained strategic competition with China and, equally, whether it is feasible for Washington to assemble and maintain a like-minded regional coalition that will be necessary for any extended standoff.

Succinctly put, as Sheila A. Smith, the well-known author and regional expert on East Asia at the Council on Foreign Relations, New York, wrote recently, “If the past year is any indication of the year ahead, US policy in Asia will be erratic and self-serving.” Yet, Indian strategists are unable to disengage from the western paradigm of international relations predicated on geopolitical competition, rivalries and confrontation and security dilemmas. They are uninterested in exploring the hidden charms of shared development with China.

A Chinese commentary recently noted, “India’s strategic circles failed to understand and implement the spirit of the Wuhan meeting. In other words, their suspicion and hostility toward China have not changed.” Indeed, the Sisyphean reflexes keep reappearing. What was so improper if the Chinese ambassador in Delhi sought to extend courtesies to Rahul Gandhi before his pilgrimage to Mansarovar? It is an open secret, after all, that Rahul Gandhi may well become the inheritor of the “Wuhan spirit”.