Prime Minister Narendra Modi’s keynote address at the annual Shangri-La Dialogue in Singapore on June 1 can be regarded as the final foreign policy testament of his government. With less than a year left in the term, the time for major foreign policy initiatives is long gone. This speech probably reflects how Modi wants his legacy to be remembered in India’s diplomatic history.

Shangri-La can be a mythical Himalayan utopia or an idyllic place of refuge during what the Russians call the 'Time of Troubles'. The latter seems to be the case here. Modi’s speech has three inter-related vectors—recalibration of India’s strategic autonomy; rebalancing of relations with the three big powers (US, Russia and China); and, a revisionist approach to the Indo-Pacific region.

Modi began his address by audaciously mentioning India’s special and privileged relations with Russia as the measure of its strategic autonomy. He recalled that only recently had he “shared our views on the need for a strong multipolar world” with President Vladimir Putin. Didn’t Modi know that his audience included US Secretary of Defence James Mattis, and that the Trump administration’s national security strategy highlights Russia (and China) as existential threats to America’s global dominance? Indeed, he made a profound point right at the outset. 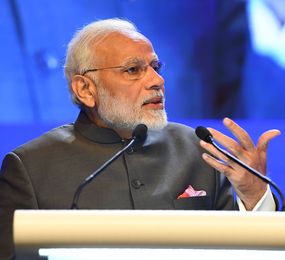 Making a point: Modi at the Shangri-La Dialogue | AFP

Modi reaffirmed the “Wuhan spirit” and his understanding with Chinese President Xi Jinping that strong and stable Sino-Indian ties constitute an important factor of global peace and progress, and that the two countries are displaying maturity and wisdom in “managing issues and ensuring a peaceful border.” But, Modi also noted India’s deepening partnership with the US.

The Chinese analysts have expressed satisfaction. A commentary in the Chinese Communist Party daily Global Times noted, “Whether India accepts the concept of the B&R [Belt and Road] is not a top priority in Sino-Indian relations. What the two countries can focus on is rolling out measures to encourage cooperation on concrete projects. We believe that any contradictions can be solved ultimately as long as cooperation goes forward.” Clearly, India’s reservations over China’s Belt and Road Initiative won’t stand in the way of bilateral cooperation. Suffice to say, India’s strategic autonomy matters to China.

Modi rebalanced India’s relations with the US, Russia and China. In sum, India will not identify with the American containment strategies against Russia and China; nor will India get entangled in the big-power rivalries in regional politics. India eschews any bloc mentality. Modi acknowledged India’s affinities in terms of its values, but rejected the America First doctrine of the US administration and stated India’s commitment to globalisation and free trade.

Modi reserved some stunning remarks regarding the concept Indo-Pacific. For a start, Modi hewed the American mantra of “free and open Indo-Pacific” of its rough edges and chose to call it an “open, stable and prosperous Indo-Pacific.” Incredibly enough, Modi called Indo-Pacific a “natural region”—a “geographical definition”. He never once mentioned the “Quad” and, instead, stressed inclusiveness and openness in regional processes. He underscored India’s faith in regionalism and multilateralism and clarified that “our friendships are not alliances of containment”. Modi cautioned against an “Asia of rivalry” and any attempts “forcing new divisions” in the region. All in all, India attributes centrality to the ASEAN in its Indo-Pacific strategy and Act East policies. (Ironically, last week, Pentagon rechristened its Pacific Command as Indo-Pacific Command.)

Alas, it took four long years for Modi to make this voyage of discovery. It’s been a chronicle of wasted time where India chased the chimera of a “defining partnership” with the US that eventually proved barren and adopted muscular diplomacy vis-à-vis China that turned out to be dangerously counterproductive. The good part is that lessons learnt the hard way are likely the enduring ones.