The art of the Korean deal

The dramatic breakthrough in the situation around North Korea rests on four pillars: Kim Jong-un’s commitment to denuclearisation, pledge to “refrain” from further nuclear or missile tests, acceptance of “routine” US-South Korea joint military exercises, and his “eagerness to meet President Trump as soon as possible”. It is delicately poised. Unsurprisingly, apocalyptic predictions are rife. But, it is also possible to remain cautiously optimistic.

The upcoming Trump-Kim meeting in May promises to be the “summit of the century”, reminding us in some ways the epochal setting of the Munich Summit of 1938 between Neville Chamberlain and Adolf Hitler under the shadow of war. To be the devil’s advocate, notwithstanding the West’s demonising of Kim, he is acting rationally. Having secured national security through a nuclear deterrent, Kim is making the next logical move, reaching out to adversaries to seek talks and cooperation.

North Korea’s “denuclearisation” will depend on a number of factors– primarily, the US ending its threatening posturing and lifting sanctions. Indeed, big issues are also involved in the downstream, such as the withdrawal of US troops in South Korea, which, in turn, would impact the US’ alliance system in northeast Asia. It could effectively signal the end of the post-1990 world order with profound implications for the role the US will play in Asia. 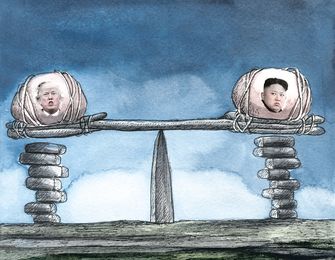 On the other hand, if the US-North Korea rapprochement takes place under Trump’s watch, it will not only be seen as a world-changing achievement, but also signify a personal triumph for the US president—underscoring his creative and blunt approach backed with artful backroom diplomacy—which will turn the dial in his beleaguered presidency and render the investigation of his “Russia collusion”, et al. a mere footnote, allowing him to surge forward and make his re-election bid in 2020. To be sure, Trump will rise in global stature like no American president since Ronald Reagan. From the “hands-on” role Trump has assumed, he seems conscious of what is at stake. Suffice to say, while the summit with Kim might seem like a gamble by Trump, a long-shot deal with the North Korean leader suits both leaders eminently.

Last, but not the least, the inter-Korean rapprochement is steadily gaining momentum. A summit between Kim and South Korean President Moon Jae-in is due to take place next month. Trump should know that direct negotiations with Kim are better than the alternatives. While America’s economic and military might are locked, loaded and ready for a confrontation with North Korea, the fact remains that Trump will also be at a Rubicon, given the chilling reality that Pyongyang is now thought to have 60 nukes. Thus, many American experts are already arguing that Trump should focus on containing North Korea’s nuclear programme rather than try to eliminate it at this point. It involves Washington abandoning the talk of invasion or regime change, and, instead, focusing on a freezing of the North Korean programme in exchange for sanctions relief or other concessions.

Trump called Xi Jinping on March 9. China’s cooperation in keeping up the “maximum pressure” approach is extremely vital for the US. The current sanctions are real, robust and bound to bite. China is finally helping, and America’s credibility has been boldly restored. Meanwhile, “denuclearisation” is in China’s interests, too, while the overall trajectory—“double suspension” (suspension of US military exercises in lieu of freeze on nuclear/missile tests by Pyongyang) alongside “dual approach” (engagement plus sanctions)— conforms to what Beijing espouses. Again, China is uniquely placed to influence the outcome of the inter-Korean dialogue. Indeed, China has all along pushed for direct US-North Korea talks. However, Beijing does not visualise a quick solution. The signs from Beijing would indicate where the game is headed.