We need a shot of optimism to defeat COVID-19: Jyotiraditya Scindia

As the world continues to grapple with the uncertainty of the virus’s trajectory and the evolving new strains, India is facing its worst Covid-19 wave that has unleashed tremendous suffering. The need of the hour is for all stakeholders to rise above whataboutery and act as citizens first with a common goal—to defeat the virus.

A second wave was inevitable, but the magnitude of virulence could not have been forecast—neither in India, nor in other countries. So, let’s view India’s position vis-à-vis its developed and developing counterparts. India’s daily cases crossed the three lakh mark on April 21, which was the case in the US on January 2. At this juncture, health infrastructure broke down in the US. Similarly, the UK (which is home to a small population of 65 million) saw its systems collapse after daily active cases reached the 70,000 mark. Thus, even developed countries do not possess health infrastructures that could withstand an India-like astronomical caseload. Nevertheless, the Union government pulled out all the stops to cope with this mammoth challenge.

The government pressed into action from the very first signs of a second wave in Kerala in January. On January 7, a high-level team constituted by the Central government was rushed to Kerala to support its fight against the surge in cases. In fact, since September 2020, more than 75 high-level teams have been deployed across states. We have scaled up our health care capacity in terms of centralised quarantine centres, isolation and ICU beds. We have tripled the number of ventilators since last year. Our production capacity of medical oxygen has increased from 2,000 tonnes to 10,000 tonnes per day. 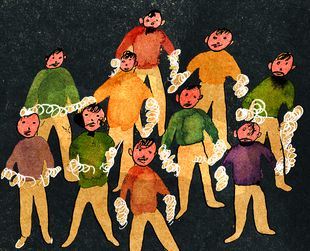 To address the logistics issue, we are importing tankers, airlifting empty tankers and oxygen containers with the help of the Air Force, and are even using trains as ‘Oxygen Expresses’ to ferry tankers.

As a result, today, active cases and positivity rate are on a decline (national average is less than 20 per cent)—signs that the Centre’s advisory to states has worked well in containing the virus spread. Most mathematical models have predicted passing the second wave peak, and for nationwide cases to start dropping by mid-May.

The ultimate solution now lies in vaccinating speedily. A back-of-the-envelope calculation shows that we need 1.89 billion vaccine doses to inoculate 70 per cent of our population. Our current production capacity is 85.3 million doses a month. According to the data submitted by manufacturers of eight Covid-19 vaccines, it is likely to double to 167 million per month by July, and cumulatively, 2.16 billion by December end.

Top government adviser, Dr V.K. Paul, recently stated that the Central government and Bharat Biotech would invite other companies to produce the indigenous Covaxin. This would help address the current shortage.

Thus, the Centre’s roadmap for vaccination is well placed to achieve herd immunity in the coming months. To win the battle, however, all parties must agree upon something critical—the opposition needs to quit blind criticism and band together, as this is about India winning the battle, and not about competitive politics. We cannot afford to indulge in petty politics, ignore humanism, and concentrate on the sole basal instinct of scoring points against each other.

This is an all for one, and one for all situation. We will soon march towards victory in our fight against this virus. But for that to happen, as Mohan Bhagwat said, “everyone should keep their mind positive and body Covid negative”.