A landmark judgment made early this year by the Supreme Court rekindled the dialogue on the much debated issue of fixing a near universal basic income for homemakers. Sure, it is path-breaking to recognise women’s work as “valuable”, rather than as a labour of love that need not be remunerated. From an electoral standpoint, it is only sensible for political parties to appeal to this voting bloc. In Tamil Nadu, out of the 6.26 crore total electorate, 3.18 crore are female voters.

But there are a few things to consider. In its manifesto, the Makkal Needhi Maiam assured a sum of Rs3,000 a month to homemakers, “who only did household chores”. Naturally, parties should think about factoring in the category of women who are “not full-time homemakers in low-income groups”. Besides, like all other states, Tamil Nadu is already reeling under the financial burn caused by heavy Covid-related expenditures; not to mention burgeoning debt in its balance sheets. The government-to-be would be tasked with finding a way to foot these payouts month after month. Thus, laying out a reasonable implementation plan alongside would not only help assuage such concerns but also go a long way in creating a feasible, replicable model for all states. 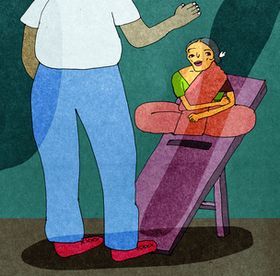 Ensuring economic security for homemakers is a complex, multi-pronged exercise, and parties that pledge themselves to the cause should aim to address the core issues, such as women disappearing through the cracks in our labour market. Between 1990 and 2019, India’s female labour force participation rate declined from 30.28 per cent to 20.52 per cent, the lowest in the subcontinent. According to the latest estimates of the Centre for Monitoring Indian Economy, a lot more may have dropped out after the pandemic.

These statistics suggest that staunch patriarchal attitudes have come home to roost, having given birth to gender disparities that manifest in low educational levels, unsafe workplaces, unequal employment opportunities and wages. In some southern states, there is a visible gender wage gap in the rural casual labour sector―a visible flaw in their model of development. What is rather disturbing is that the Census of India puts homemakers in the category of “non-workers”, which ultimately puts them on the back burner of policy priorities.

The rot, therefore, runs deep. Perhaps, governments should borrow from the Madhya Pradesh model, where the government provides bank loans at a 2 per cent rate of interest (the remainder paid by the state government) to more than three lakh self-help groups (almost 37 lakh women), to help run their micro-scale businesses. The government is also working on getting at least one woman from each family to join an SHG and earn, thus enhancing their share of participation in the overall labour force.

Doles aside, we need policies that enable more women to join the labour force, assure women of a safe environment and equal opportunities at work; and perhaps, governments can take steps to reduce and redistribute domestic work. That is when we would be in for an actual progressive pawri!