The past few weeks have been very distressful, punctuated with deaths of admired figures from the world of arts. Keith Flint of Prodigy; Dick Dale, the king of surf guitar; and Karl Lagerfeld, to name a few. Yet, the biggest shocker was the departure of a fellow traveller, Okwui Enwezor, who died of cancer on March 15.

Okwuchukwu Emmanuel Enwezor was born on October 23, 1963, in Calabar, a port city in southern Nigeria, close to the border with Cameroon. He moved to the US in 1982 and earned a bachelor’s degree in political science. However, his sights were set on claiming for Africa its rightful place on the global art map. He was the first non-European, non-white, artistic director of the prestigious Documenta [eleventh edition]. In addition to Documenta, he also curated the acclaimed 1997 Johannesburg Biennale, the Gwangju Biennale in South Korea (2008), the Paris Triennale (2012) and the Venice Biennale (2015). He was also the director of Munich’s Haus der Kunst. 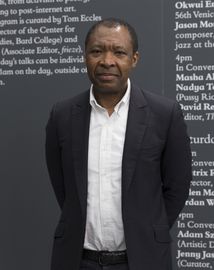 Documenta was built on his vision of a set of programmes called ‘Platforms’ that were international debates, conferences and closed seminars that took place over a two-year period in Berlin, Vienna, New Delhi, St Lucia and Lagos. With his curatorial intelligence, Documenta 11 succeeded in bringing issues such as genocide, poverty, political incarceration and industrial pollution to the fore through 415 works by 180 artists from five continents. It also explored border disputes, contested territories (such as Pakistan and India, or Palestine and Israel), and collapsing urban space. At Venice, his curatorial power of sight manifested again. He anchored his show in one work of literature: Marx’s Das Kapital. He had a team of performers staging daily readings from the book till the close of the biennale. “I wanted to do something that has contemporary relevance,” he told an interviewer. “And, so, I thought of Das Kapital, a book that nobody has read and yet everyone hates or quotes from.”

My association with him goes back to 2010 when my research for the Kochi-Muziris Biennale took me to Gwangju (to look for artists and to experience a biennale).The biennale’s artistic director was the young curator Massimiliano Gioni. It was a memorable experience because one thing led to another and we (Riyas Komu, Shwetal Patel and me) ended up meeting young curatorial students, curator Dan Cameron, legendary and controversial artist Ai Weiwei and, finally, Enwezor. We spent some time with Enwezor at his hotel to discuss our inaugural biennale. He was sceptical and laughed off our idea: “Aha, yet another biennale!” Then he launched into the trials and tribulations he faced while putting together the Johannesburg Biennale.

He visited the KMB in 2015. It was one of his last research trips for the Venice Biennale 2015. He found Kochi to be a platform that “offers a vital link between Asia and Africa”. He also had conversations with Riyas and Jitish Kallat at the Biennale Pavilion at Aspinwall. It was followed by a wonderful dinner at Casino Hotel, where he talked at length about the Johannesburg Biennale. I also heard a lot about him from my mentor and teacher Sarat Maharaj, who was a co-curator at Documenta 11. I still remember his unusually thick and long fingers. Dressed like a dandy (he was known for his double-breasted suits), he always had a twinkle in his eye and mirth around his lips.