In a week when Narendra Modi and Amit Shah abruptly replaced the chief minister in their home state of Gujarat, it was a BJP chief minister in another state—election-bound Uttar Pradesh—who hogged the headlines.

If the drama in Gujarat reinforced the BJP as a ‘high command’ party, where only two men matter, simultaneously it made us notice that Yogi Adityanath is probably the only state leader who cannot be summarily substituted.

Adityanath’s often abrasive and communal rhetoric has remained untempered by five years in office. His patently anti-Muslim jibe about how those who say “Abbajaan” once got a disproportionate share of rations—a coarse metaphor for ‘minority appeasement’—will not hurt him electorally; in fact it may even help, as religious polarisation so often does. 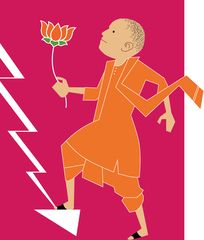 Instead of the political and public conversation being focused on the UP government’s handling of Covid-19, rising cases of dengue and protests by farmers in the western pockets, debating the Hindu-Muslim fault lines may even be the perfect deflection.

That Adityanath still sets the terms of the debate around him in a year when bodies washed ashore from the Ganga and shallow mass graves of abandoned bodies were unveiled along its banks at the height of the pandemic speaks of the utter failure of the opposition. Even in terms of hindutva, the image of saffron shrouds being removed off these bodies by the local police, so that they merged more fully with the sand they had been left in, offered a galvanising moment that was not taken by the opposition.

Pre-poll surveys show the UP chief minister down in ratings from his 2017 peak, but still distinctly ahead of competitors. While the Samajwadi Party has benefitted from the anti-incumbency, the gains seem to have been passively obtained as distinct from aggressively sought. If there was ever a context for the opposition to change the framework from caste and identity politics it was now. But we did not see mass mobilisation initiatives or cycle rallies or enough offline, non-virtual, tactile effort to meet voters. Covid protocols forbade large gatherings but this was the time for more personal, intimate, on-the-field politics.

Instead, the opposition seems to have been leaning back in a lazy chair waiting for the voters’ anger to convert organically. The worst, of course, has been the Congress, and this is reflected in all the surveys as well. So much for planted news reports about Priyanka Gandhi shifting base to UP and running for chief minister! The floundering Congress has been unable to resolve its leadership issue. So, while Sonia Gandhi continues to play a placeholder in the post of party president, the few states where the Congress is still in government are beginning to simmer with factionalism.

Make no mistake, if Bengal was the most important bulwark against the expansionism of the BJP, retaining Uttar Pradesh will set the stage for 2024. And, if Yogi Adityanath does manage to pull off a win, as the signs suggest he might well, it could make him the most significant BJP leader after the prime minister and home minister. The consequences for the BJP’s internal power dynamic thereafter will be intriguing.

What happens in UP will not stay only in UP.