There has never been a more dangerous time for Indian security interests than now, with the developments in Afghanistan.

The responsibility for the victory of the Taliban may rest squarely with the Americans—and to some extent with Afghan politicians who failed to build an authentic following among their people—but the cross will be carried by India.

The Taliban, a terrorist project of Pakistan—or what Dr Christine Fair has called a wholly-owned subsidiary of the Pakistani state—has long been enmeshed with an intricate network of terror groups, including the Al-Qaeda, and the Islamic State of Iraq and Syria. Elements of it, in particular the Haqqani network, have been fostered by the Inter-Services Intelligence and the Pakistani deep state. Sirajuddin Haqqani is today a deputy leader of the Taliban. 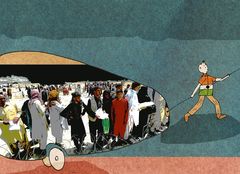 India was among 12 countries to say that it would not recognise a government in Afghanistan that has been imposed by force. But with Ashraf Ghani fleeing the country and the Taliban literally being able to saunter into the presidential palace, albeit at gunpoint, it is unclear how long India can decline to establish official relations with the Taliban. Even to evacuate our diplomats and jawans from the embassy in Kabul, a certain local and tactical engagement with the Taliban would have been unavoidable.

Eventually, India may have no option but to engage the Taliban and use the influence of our economic investments in the region to mitigate the extremism of the regime. But even in that process, we will be countering the Pakistan-China axis. It is no surprise that China hosted a Taliban delegation even before Kabul had fallen. And that Pakistan, China and Russia remain the three major functional embassies in Kabul today.

There will also be consequences for Kashmir. Two decades ago, it was not uncommon for the foreign terrorists in the valley to be from countries like Afghanistan and even Sudan, alongside local militants and Pakistani terrorists. With Pakistan’s deep roots in large sections of the Taliban establishment, the attempt to revive Kashmir as a pan-Islamist project cannot be ruled out. Pakistan, already smarting from the abrogation of Article 370 two years ago, will be looking for means to re-leverage itself into this matrix.

Any option for India is currently a choice from a substandard menu. India’s wisest route probably remains in standing with the people of Afghanistan. Opening up emergency visas for all Afghans (amending an earlier foreign ministry statement that named Hindu, Sikhs and Afghan partners specifically) is a smart move in this direction. Let India be the benevolent, accessible, friendly powerhouse for a new generation of Afghans. Let us remember that there is a post-Taliban generation that has never known life under the Taliban. India should be a natural port of call for them.

A ‘me-too’ relationship with the Taliban does not just upend decades of our stated position on terrorists; it is also destined to fail given the historic links between the Taliban and Pakistan, and China’s overarching influence. Despite the immediate tactical pressures to normalise the Taliban and despite the need for covert channels of communication to remain open with it, India should opt to side with the underdog—the people of Afghanistan, especially its women.

This would not just be the correct moral principle; it would also be smart statecraft at a time of diminishing alternatives.