We have to own our COVID deaths, says Barkha Dutt

Many morally egregious developments have taken place in the past two months amid a colossal failure to contain the second wave of the pandemic. The most obvious have been the failure to order enough vaccines, the gifting and exporting of vaccines before securing them for citizens, the failure to ensure oxygen supply to hospitals, the decision forcing government teachers to go on election duty, and permitting massive political and religious gatherings during the crisis.

But now, as Covid fires sweep through rural India, we are confronted with a new ignominy: the refusal to count our dead.

I have spent more than ten days travelling through rural Uttar Pradesh, uncovering floating corpses and buried bodies at six different points along the Ganga—Varanasi, Kannauj, Kanpur, Unnao, Prayagraj and the Nanamau ghat in Kanpur Dehat district. I have travelled three hours by boat down the river as well. And the dead do speak if we care to listen. Eyewitnesses confirm that they have never seen a pile-up of bodies in this manner, both in number and in the way they have been abandoned, often in the cover of night. There appear to be two reasons for this dumping of bodies: the absence of money to spend on cremations and the stigma and fear associated with Covid. 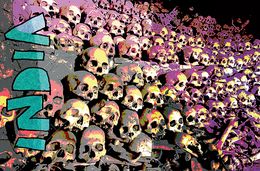 To make matters worse, the police have been supervising the removal of Ramnami chadar (sheets with Lord Ram’s name printed on them) from bodies at Prayagraj—perhaps to avoid any further documentation. Surely this is the final, unforgivable indignity.

Apart from the mass graves, there are two other giant factors that are contributing to the serious underreporting of Covid fatalities. In village after village, residents are confirming a surge in the number of deaths over the past month, from what is being described as a sudden onset of fever. In most cases, though, with hardly any testing or health care facilities accessible, people are dying at home, often within three or four days of contracting the virus. Since they never reach hospitals and are never tested for Covid, the death certificates either offer no cause of death or list typhoid and pneumonia as reasons for it.

From the east of Uttar Pradesh to the west, the documentation of deaths is almost negligible. In Basi Gao, two hours from Delhi, villagers said “not even one house was untouched by fever”. The village has more than 5,000 residents. It was the same story at the other end in Ramana, which is part of the prime minister’s constituency, Varanasi. “Forty people have died over the last month,” said the village pradhan. “Barely anyone made it to the hospital.”

Finally, in state after state, there is a mismatch between the number of deaths reported by districts and the pyres burning at cremation grounds and the burials happening in graveyards. Be it in Surat, Ghaziabad, Delhi or Varanasi, undertakers are reporting numbers that are at least ten times more than what the government is acknowledging. Data scientist Bhramar Mukherjee told me that 1.2 million Indians have already died, and that the number is “a conservative estimate”.

Before India claims to have left the worst of the second wave behind, we must at least demand to know how many have died. We must own our Covid deaths.