One of the big untold stories of the pandemic year will be how it impacted women. With families forced to hunker down and work from home—this may possibly become the norm even when things fully normalise—women, in India and elsewhere, are reeling under the consequences.

There has been some acknowledgment of the surge in domestic violence cases. In India, the National Commission for Women revealed that it received 5,000 complaints of domestic violence against women and children as of December 2020, a sharp spike from the 660 cases reported in July 2020. 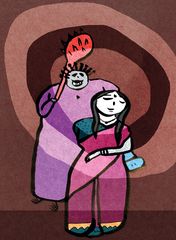 This phenomenon is being called the ‘shadow pandemic’.

But lurking behind these headlines is the story of how casual sexism has become institutionalised and legitimised in a way that could have long-term consequences in the battle for equality.

Facebook’s Survey on Gender Equality at Home report—done in collaboration with the World Bank, UN Women, Ladysmith and others—reached a statistically representative sample of roughly half a million people who use Facebook, globally. While many of the experiences for women cut across geographies and cultures, the results from India are revealing.

That women have often been unpaid care-givers is an established fact. But with schools going online, and spouses and children both at home, for women, this has been a year more harrowing than most. For women who also hold a job outside of the home, the pressure has been near debilitating. Asked how many hours per day either gender spent on care activities for family members, men said they spent 6.66 hours compared with the nearly ten (9.7) that women do.

And most disappointingly, perpetuating sexist stereotypes, 73 per cent of men surveyed agreed that “a woman’s most important role is to take care of her home and children”; 63 per cent of women assented to that proclamation. At a time when women are breaking barriers in every space—flying fighter jets, leading companies, arguing for combat roles in the infantry, helming newsrooms—it is almost tragic to hear that such few women privilege their personal and professional ambitions ahead of the gendered expectations of them at home.

The truth that we do not recognise is that there can be no equality at work without equality at home. In India, the female labour force participation has been sharply declining. According to the Centre for Monitoring Indian Economy, during March-April last year, 26.6 per cent of women moved out of the labour force versus 13.4 per cent of men. Put simply, it means that fewer women are working today than earlier. What appears to be like progress is in fact the exact opposite when it comes to women in the workforce and attrition rates. A key reason for this is the impossibility of juggling the multiple roles demanded of women at office and home.

We have focused all our energy on the workspace. We need to turn our gaze inwards and start talking much more about what goes on right in our own backyard.